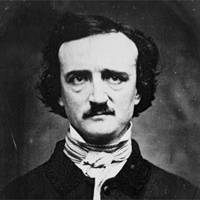 Edgar Poe was born in Boston, Massachusetts on January 19th, 1809.  His parents were David and Elizabeth Poe.  They were itinerant actors.  David was born in Baltimore on July 18th, 1784. Elizabeth Arnold came to the U.S. from England in 1796 and married David Poe after her first husband died in 1805.  They had three children, Henry, Edgar, and Rosalie. Elizabeth Poe died in 1811, when Edgar was 2 years old.  She had separated from her husband and had taken her three kids with her. Henry went to live with his grandparents while Edgar was adopted by Mr. and Mrs. John Allan and Rosalie was taken in by another family.  John Allan was a successful merchant (a tobacco exporter), so Edgar grew up in good surroundings and went to good schools. He took the surname Allan for his own middle name after 1824.   Between 1815 and 1820, Poe and the Allans lived in England and the young orphan attended Manor House school in Stoke Newington.  He learned Latin and French, as well as math and history.  He later returned to school in America and continued his studies. After his return to the United States, Poe went to the University of Virginia but left after he accumulated considerable gambling debts trying to make up for other money he owed.  He published his first volume of poetry, Tamurlane and Other Poems anonymously and at his own expense in 1827. After this, Poe joined the army and entered West Point in 1830, although he was dishonourably discharged one year later for intentional neglect of duties. Poe had continued writing poetry and publishing at his own expense during this period, but now he sought employment as a professional writer.  He began to write the short stories that would constitute his great legacy to literature and published them in magazines. At this time he was living in poverty with his aunt Mrs Clemm in Baltimore. He would marry her thirteen-year-old daughter Virginia (his cousin) in 1836, but her tuberculosis and his depression were an unhappy combination.  The first collection of Poe's stories, Tales of the Grotesque and Arabesque was published in 1840 and contained the famous Gothic romance "The Fall of the House of Usher". It was the poem "The Raven" and its accompanying volume of poetry (published in 1845) that brought Poe fame, however.  But he was still struggling against poverty.  He remained sadly underrated in his own time.  Even in 1846, Poe failed to sell a collection of stories for the price of $50. He was given only $14 for Eureka and even that was on the basis that if it sold less then he would have to make up the difference.  His alcoholism addiction worsened, unsurprisingly and he made one attempt at suicide.  His wife passed away in 1847.  On October 3rd 1849, Poe was found at Gunner's Hall, a public house at 44, East Lombard Street, and was taken to the hospital. He lapsed in and out of consciousness but was never able to explain exactly what happened to him.  Edgar Allan Poe died in the hospital on Sunday, October 7th, 1849.  After his death his reputation grew considerably with the enthusiastic response of Swinburne, Wilde, Rossetti and Yeats to his poetry, and of Stevenson among others to his short stories.

A gothic romance in which the narrator visits the crumbling mansion of his childhood companion, Roderick Usher, to find both Usher and his twin sister, Madeline, in the last stages of mental and physical weakness. The story begins with the unnamed narrator arriving at the house of his friend, Roderick Usher, having received a letter from him in a distant part of the country complaining of an illness and asking for his help. As he arrives, the narrator notes a thin crack extending from the roof, down the front of the building and into the lake. Although Poe wrote this short story before the invention of modern psychological science, Roderick's condition can be described according to its terminology. It includes a form of sensory overload known as hyperesthesia (hypersensitivity to textures, light, sounds, smells and tastes), hypochondria (an excessive preoccupation or worry about having a serious illness) and acute anxiety. It is revealed that Roderick's twin sister, Madeline, is also ill and falls into cataleptic, deathlike trances. The narrator is impressed with Roderick's paintings, and attempts to cheer him by reading with him and listening to his improvised musical compositions on the guitar. Roderick sings "The Haunted Palace", then tells the narrator that he believes the house he lives in to be alive, and that this sentience arises from the arrangement of the masonry and vegetation surrounding it. Roderick later informs the narrator that his sister has died and insists that she be entombed for two weeks in the family tomb located in the house before being permanently buried. The narrator helps Roderick put the body in the tomb, and he notes that Madeline has rosy cheeks, as some do after death. They inter her, but over the next week both Roderick and the narrator find themselves becoming increasingly agitated for no apparent reason. A storm begins. Roderick comes to the narrator's bedroom, which is situated directly above the vault, and throws open his window to the storm. He notices that the tarn surrounding the house seems to glow in the dark, as it glowed in Roderick Usher's paintings, although there is no lightning. The narrator attempts to calm Roderick by reading aloud The Mad Tryst, a novel involving a knight named Ethelred who breaks into a hermit's dwelling in an attempt to escape an approaching storm, only to find a palace of gold guarded by a dragon. He also finds, hanging on the wall, a shield of shining brass on which is written a legend. As the narrator reads of the knight's forcible entry into the dwelling, cracking and ripping sounds are heard somewhere in the house. When the dragon is described as shrieking as it dies, a shriek is heard, again within the house. As he relates the shield falling from off the wall, a reverberation, metallic and hollow, can be heard. Roderick becomes increasingly hysterical, and eventually exclaims that these sounds are being made by his sister, who was in fact alive when she was entombed. Additionally, Roderick somehow knew that she was alive. The bedroom door is then blown open to reveal Madeline standing there. She falls on her brother, and both land on the floor as corpses. The narrator then flees the house, and, as he does so, notices a flash of moonlight behind him, causing him to turn back in time to see the moon shining through the suddenly widened crack. As he watches, the House of Usher splits in two and the fragments sink into the tarn.

"The Tell-Tale Heart" is a first-person narrative of an unnamed narrator who insists he is sane but suffering from a disease (nervousness) which causes "over-acuteness of the senses". The old man with whom he lives has a "vulture-like" eye which so distresses the narrator that he plots to murder the old man, though the narrator states that he loves the old man, and hates only the eye. The narrator insists that his careful precision in committing the murder shows that he cannot possibly be insane. For seven nights, the narrator opens the door of the old man's room, in order to shine a sliver of light onto the "evil eye". However, the old man's vulture-eye is always closed, making it impossible to "do the work".On the eighth night, the old man awakens after the narrator's hand slips and makes a noise, interrupting the narrator's nightly ritual. But the narrator does not draw back and, after some time, decides to open his lantern. A single thin ray of light shines out and lands precisely on the "evil eye", revealing that it is wide open. Hearing the old man's heart beating loudly and dangerously fast from terror, the narrator decides to strike, jumping out with a loud yell and smothering the old man with his own bed. The narrator then dismembers the body and conceals the pieces under the floorboards, making certain to hide all signs of the crime. Even so, the old man's scream during the night causes a neighbor to report to the police. The narrator invites the three arriving officers in to look around. He claims that the screams heard were his own in a nightmare and that the man is absent in the country. Confident that they will not find any evidence of the murder, the narrator brings chairs for them and they sit in the old man's room, on the very spot where the body is concealed, yet they suspect nothing, as the narrator has a pleasant and easy manner about him. The narrator begins to feel uncomfortable and notices a ringing in his ears. For a moment he thought maybe that it was from the man shooting but then realizes its not. As the ringing grows louder, the narrator comes to the conclusion that it is the heartbeat of the old man coming from under the floorboards. The sound increases steadily, though the officers seem to pay no attention to it. Terrified by the violent beating of the heart, and convinced that the officers are aware of not only the heartbeat, but his guilt as well, the narrator breaks down and confesses. He tells them to tear up the floorboards to reveal the body.