The British poet and painter known for his absurd wit, Edward Lear was born on May 12th 1812 and began his career as an artist at the age of 15. His father, a stockbroker of Danish origins, was sent to debtor’s prison when Lear was thirteen and the young Lear was forced to earn a living (Like young Charles Dickens).  From early childhood, he suffered from depression and by the age of six, he was having epileptic fits, an illness he did his best to conceal.

Edward Lear quickly gained recognition for his work and in 1832, he was hired by the London Zoological Society to execute illustrations of birds. In the same year, the Earl of Derby invited him to reside at his estate; Lear ended up staying on until 1836. 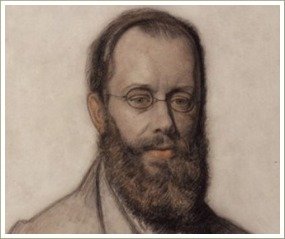 His first book of poems, A Book of Nonsense (1846) was composed for the grandchildren of the Derby household. Around 1836 Lear decided to devote himself exclusively to landscape painting (although he continued to compose light verse). Between 1837 and 1847 Lear traveled extensively throughout Europe and Asia.
After his return to England, Lear’s travel journals were published in several volumes as The Illustrated Travels of a Landscape Painter. Popular and respected in his day, Lear’s travel books have largely been ignored in the twentieth century. Rather, Lear is remembered for his humorous poems, such as “The Owl and the Pussycat," and as the creator of the form of the modern limerick.  A limerick is a humorous poem consisting of five lines. The first, second, and fifth lines must have seven to ten syllables while rhyming and having the same verbal rhythm. The third and fourth lines only have to have five to seven syllables, and have to rhyme with each other and have the same rhythm.
Like his younger peer Lewis Carroll, Lear wrote many deeply fantastical poems about imaginary creatures, such as “The Dong with the Luminous Nose.” His books of humorous verse also include Nonsense Songs (1871) and Laughable Lyrics (1877). Lear died in Italy on January 29th 1888 at the age of 76.
Although the subject and form of his works varies greatly, all of Lear’s poems can be characterized by his irreverent view of the world; Lear poked fun at everything, including himself in “By Way of a Preface.” Many critics view Lear’s devotion to the ridiculous as a method for dealing with or undermining the all-pervasive orderliness and industriousness of Victorian society. His humour has proved irrefutably timeless.
His book of limericks which is called 'A Book of Nonsense' was first published in 1846. It was so popular that two further editions were published during his lifetime. The book is still in print under the title Complete Nonsense.
Unlike some modern limericks, Lear’s limericks are almost all truly nonsensical in that there was absolutely no point or message in them. They don’t have punch lines or any of the sometimes very rude humour that we’re used to in so many limericks today.Edward Lear was a true poet who loved the sounds of words, both real and imaginary, and delighted in filling his nonsense poems with words he invented himself. The most memorable and delightful of these is the ‘runcible spoon’ which occurs in the last few lines of The Owl and the Pussycat.
The way Lear loved to play with words and the sounds they make and the way he enjoyed inventing new words is exactly the kind of activity young children need in order to develop a skill called phonological awareness. That's why it is also important for ESL students. 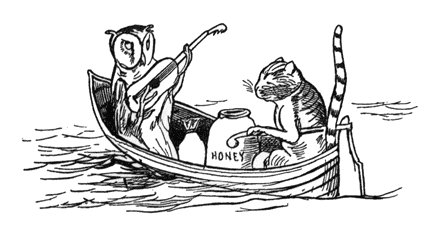 THE OWL AND THE PUSSY CAT (1871)
I
The Owl and the Pussy-cat went to sea
In a beautiful pea green boat,
They took some honey, and plenty of money,
Wrapped up in a five pound note.
The Owl looked up to the stars above,
And sang to a small guitar,
'O lovely Pussy! O Pussy my love,
What a beautiful Pussy you are,
You are,
You are!
What a beautiful Pussy you are!'
II
Pussy said to the Owl, 'You elegant fowl!
How charmingly sweet you sing!
O let us be married! too long we have tarried:
But what shall we do for a ring?'
They sailed away, for a year and a day,
To the land where the Bong-tree grows
And there in a wood a Piggy-wig stood
With a ring at the end of his nose,
His nose,
His nose,
With a ring at the end of his nose.
III
'Dear pig, are you willing to sell for one shilling
Your ring?' Said the Piggy, 'I will.'
So they took it away, and were married next day
By the Turkey who lives on the hill.
They dined on mince, and slices of quince,
Which they ate with a runcible spoon;
And hand in hand, on the edge of the sand,
They danced by the light of the moon,
The moon,
The moon,
They danced by the light of the moon.

THERE WAS AN OLD MAN WITH A BEARD 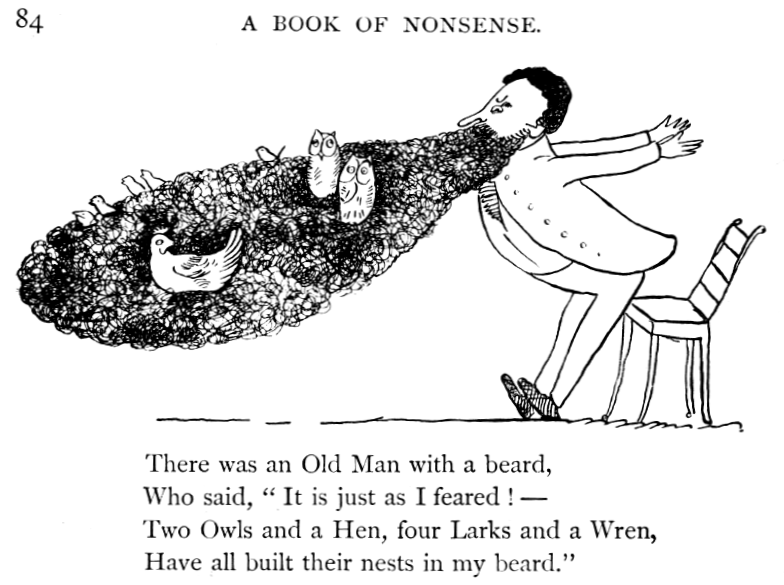