Her skill and emotional intelligence transformed women's poetry in Britain.

She spent her earliest years in Kent. She attended St Anne's College Oxford afterwards becoming a teacher and ultimately Head of English at Cheltenham Ladies' College.

However, she only began writing when she turned her back on her teaching career to become a receptionist at a psychiatric hospital where her observation of the "strange specialness" of the patients provided the inspiration for her first book, Side Effects.

Since that relatively late start, Fanthorpe was prolific, producing 9 full-length collections, including the Forward Prize-nominated Safe as Houses and the Poetry Book Society Recommendation Consequences. 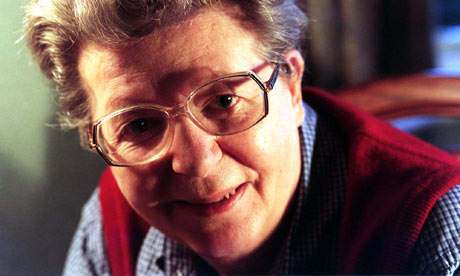 As mute as monks, tidy as bachelors,

They manicure their little plots of earth.

Counterpoints with the Sunday-morning bells,

But neither siren voice has power for these

Or walking softly down a row of beans.

The manly fullgrown cauliflower will need.

And all must toe the line here; stem and leaf,

As well as root, obey the rule of string.

In sweet conformity; but head in air

Soars the unruly loveliness of beans.

They visit hidden places of the earth

When tenderly with fork and hand they grope

To lift potatoes, and the round, flushed globes

Patience and energy and sense of poise

It takes to be an onion; and they share

The subtle benediction of beans.

They see the casual holiness that spreads

Unfurl their veined and rounded fans in joy,

And buds of sprouts rejoice along their stalks.

And stay up later.

He lives in a world of small recalcitrant

Things in bottles, with tacky labels. He was always

Now his hands shamble among clues

He left for himself when he saw better,

Lord once of shed, garage and garden,

Each with its proper complement of tackle,

Sorts of glue, connoisseur of nuts

And bolts, not good with daughters

But a dab hand with the Black and Decker,

Self-demoted in your nineties to washing-up

After supper, and missing crusted streaks

Of food on plates; have you forgotten

The jokes you no longer tell, as you forget

If you've smoked your timetabled cigarette?

Now television has no power to arouse

Your surliness; your wife could replace on the walls

Those pictures of disinherited children,

And you wouldn't know. Now you ramble

In your talk around London districts, fretting

At how to find your way from Holborn to Soho,

And where is Drury Lane? Old man, old man,

So obdurate in your contracted world,

Living in almost-dark, I can see you,

You said to me, but only as a cloud.

When I left, you tried not to cry. I love

Your helplessness, you who hate being helpless.

Let me find your hammer. Let me

Walk with you to Drury Lane. I am only a cloud.

Under the long flat fingers of the beans.