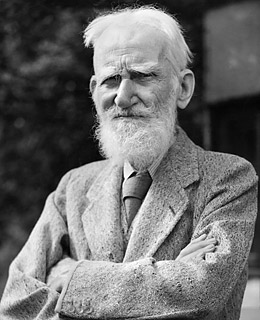 "England and America are two countries separated by a common language."

"I often quote myself. It adds spice to my conversation."

"Lack of money is the root of all evil."

"Youth is a wonderful thing. What a crime to waste it on children."

"We don't bother much about dress and manners in England, because as a nation we don't dress well and we've no manners."

"He who has never hoped can never despair."

"A government that robs Peter to pay Paul can always depend on the support of Paul."

"It is dangerous to be sincere unless you are also stupid."

"Life does not cease to be funny when people die any more than it ceases to be serious when people laugh."

"When a stupid man is doing something he is ashamed of, he always declares that it is his duty."

"Which painting in the National Gallery would I save if there was a fire? The one nearest the door of course."

"I was always unlawful; I broke the law when I was born because my parents weren't married."

"Do not do unto others as you would that they should do unto you. Their tastes may not be the same."

"She had lost the art of conversation but not, unfortunately, the power of speech."

"I’m an atheist and I thank God for it."

"All great truths begin as blasphemies."