During his short life, his work was not well received by critics, but his posthumous influence on poets such as Alfred Tennyson and Wilfred Owen was significant.

The poetry of Keats was characterised by elaborate word choice and sensual imagery, most notably in a series of odes which remain among the most popular poems in English literature.

He wrote some of the greatest English language poems including "La Belle Dame Sans Merci", "Ode To A Nightingale", and "To Autumn". 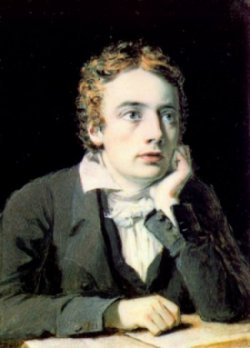 SEASON of mists and mellow fruitfulness,

Close bosom-friend of the maturing sun;

Conspiring with him how to load and bless

With fruit the vines that round the thatch-eves run;

To bend with apples the moss’d cottage-trees,

And fill all fruit with ripeness to the core;

To swell the gourd, and plump the hazel shells

With a sweet kernel; to set budding more,

And still more, later flowers for the bees,

Until they think warm days will never cease,

For Summer has o’er-brimm’d their clammy cells.

Who hath not seen thee oft amid thy store?

Sometimes whoever seeks abroad may find

Thy hair soft-lifted by the winnowing wind;

Or on a half-reap’d furrow sound asleep,

Drows’d with the fume of poppies, while thy hook

Spares the next swath and all its twined flowers:

Steady thy laden head across a brook;

Or by a cyder-press, with patient look,

Thou watchest the last oozings hours by hours.

Think not of them, thou hast thy music too,

And touch the stubble plains with rosy hue;

Then in a wailful choir the small gnats mourn

Among the river sallows, borne aloft

Or sinking as the light wind lives or dies;

The red-breast whistles from a garden-croft;

To see no other verdure than its own;

To feel no other breezes than are blown

Through its tall woods with high romances blent:

Yet do I sometimes feel a languishment

For skies Italian, and an inward groan

To sit upon an Alp as on a throne,

And half forget what world or worldling meant.

Enough their simple loveliness for me,

Yet do I often warmly burn to see

Beauties of deeper glance, and hear their singing,

And float with them about the summer waters.

ODE TO A NIGHTINGALE

MY heart aches, and a drowsy numbness pains

My sense, as though of hemlock I had drunk,

Or emptied some dull opiate to the drains

One minute past, and Lethe-wards had sunk:

’Tis not through envy of thy happy lot,

But being too happy in thine happiness,

That thou, light-winged Dryad of the trees,

In some melodious plot

Of beechen green, and shadows numberless,

Singest of summer in full-throated ease.

O, for a draught of vintage! that hath been

Tasting of Flora and the country green,

O for a beaker full of the warm South,

Full of the true, the blushful Hippocrene,

With beaded bubbles winking at the brim,

That I might drink, and leave the world unseen,

And with thee fade away into the forest dim:

Fade far away, dissolve, and quite forget

What thou among the leaves hast never known,

The weariness, the fever, and the fret

Here, where men sit and hear each other groan;

Where youth grows pale, and spectre-thin, and dies;

Where but to think is to be full of sorrow

Or new Love pine at them beyond to-morrow.

Away! away! for I will fly to thee,

Not charioted by Bacchus and his pards,

But on the viewless wings of Poesy,

Though the dull brain perplexes and retards:

Already with thee! tender is the night,

And haply the Queen-Moon is on her throne,

Cluster’d around by all her starry Fays;

But here there is no light,

Save what from heaven is with the breezes blown

I cannot see what flowers are at my feet,

Nor what soft incense hangs upon the boughs,

But, in embalmed darkness, guess each sweet

The grass, the thicket, and the fruit-tree wild;

White hawthorn, and the pastoral eglantine;

The murmurous haunt of flies on summer eves.

Darkling I listen; and, for many a time

I have been half in love with easeful Death,

Call’d him soft names in many a mused rhyme,

To take into the air my quiet breath;

Now more than ever seems it rich to die,

To cease upon the midnight with no pain,

While thou art pouring forth thy soul abroad

In such an ecstasy!

Still wouldst thou sing, and I have ears in vain -

To thy high requiem become a sod.

Thou wast not born for death, immortal Bird!

No hungry generations tread thee down;

The voice I hear this passing night was heard

In ancient days by emperor and clown:

Perhaps the self-same song that found a path

Through the sad heart of Ruth, when, sick for home,

She stood in tears amid the alien corn;

The same that oft-times hath

To toil me back from thee to my sole self!

As she is fam’d to do, deceiving elf.

Past the near meadows, over the still stream,

Up the hill-side; and now ’tis buried deep

Was it a vision, or a waking dream?

Fled is that music: - Do I wake or sleep?