T. S. Eliot (1888 - 1965)  is widely regarded as one of the most important and most influencial poets of the last hundred years.

He published his first poetic masterpiece, "The Love Song of J. Alfred Prufrock" in 1915. In 1921, he wrote the poem "The Waste Land" while recovering from exhaustion.

The dense, allusion-heavy poem went on to redefine the genre and become one of the most talked about poems in literary history.

For his lifetime of poetic innovation, Eliot won the Order of Merit and the Nobel Prize in Literature in 1948. 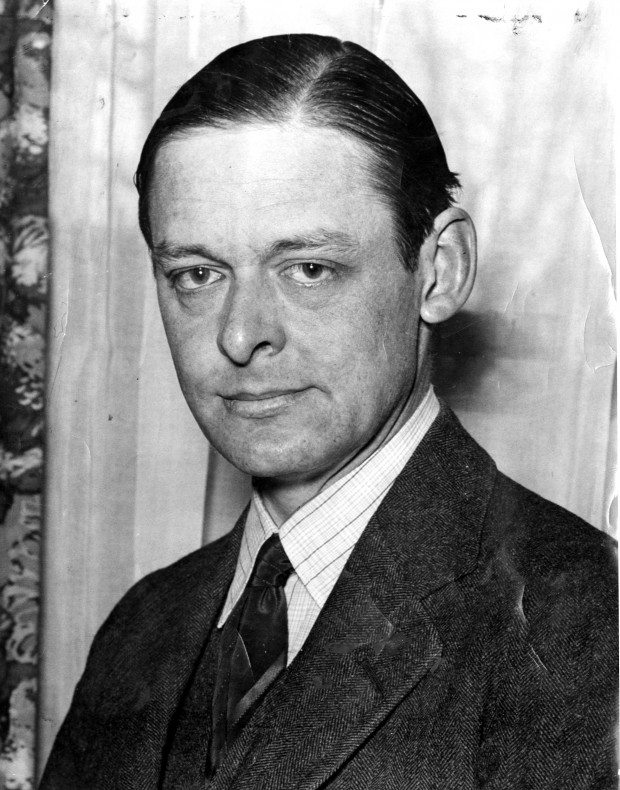 MORNING AT THE WINDOW

They are rattling breakfast plates in basement kitchens,

And along the trampled edges of the street

I am aware of the damp souls of housemaids

The brown waves of fog toss up to me

Twisted faces from the bottom of the street,

And tear from a passer-by with muddy skirts

An aimless smile that hovers in the air

And vanishes along the level of the roofs.

JOURNEY OF THE MAGI

'A cold coming we had of it,

Just the worst time of the year

For a journey, and such a long journey:

The ways deep and the weather sharp,

The very dead of winter.'

And the camels galled, sorefooted, refractory,

Lying down in the melting snow.

There were times we regretted

The summer palaces on slopes, the terraces,

And the silken girls bringing sherbet.

Then the camel men cursing and grumbling

and running away, and wanting their liquor and women,

And the night-fires going out, and the lack of shelters,

And the cities hostile and the towns unfriendly

And the villages dirty and charging high prices:

A hard time we had of it.

At the end we preferred to travel all night,

With the voices singing in our ears, saying

That this was all folly.

Then at dawn we came down to a temperate valley,

Wet, below the snow line, smelling of vegetation;

With a running stream and a water-mill beating the darkness,

And three trees on the low sky,

And an old white horse galloped away in the meadow.

Then we came to a tavern with vine-leaves over the lintel,

Six hands at an open door dicing for pieces of silver,

But there was no information, and so we continued

And arriving at evening, not a moment too soon

Finding the place; it was (you might say) satisfactory.

All this was a long time ago, I remember,

And I would do it again, but set down

This: were we led all that way for

Birth or Death? There was a Birth, certainly

We had evidence and no doubt. I had seen birth and death,

But had thought they were different; this Birth was

Hard and bitter agony for us, like Death, our death.

We returned to our places, these Kingdoms,

But no longer at ease here, in the old dispensation,

With an alien people clutching their gods.

I should be glad of another death.

I have a Gumbie Cat in mind, her name is Jennyanydots;

Her coat is of the tabby kind, with tiger stripes and leopard spots.

All day she sits upon the stair or on the steps or on the mat;

But when the day's hustle and bustle is done,

Then the Gumbie Cat's work is but hardly begun.

And when all the family's in bed and asleep,

She tucks up her skirts to the basement to creep.

She is deeply concerned with the ways of the mice —

Their behaviour's not good and their manners not nice;

So when she has got them lined up on the matting,

She teachs them music, crocheting and tatting.

I have a Gumbie Cat in mind, her name is Jennyanydots;

Her equal would be hard to find, she likes the warm and sunny spots.

All day she sits beside the hearth or on the bed or on my hat:

But when the day's hustle and bustle is done,

Then the Gumbie Cat's work is but hardly begun.