In his work Auden reconciled tradition and modernism. Auden is widely considered among the greatest literary figures of the 20th century.

As a young man he was influenced by the poetry of Thomas Hardy and Robert Frost, as well as William Blake, Emily Dickinson, Gerard Manley Hopkins, and Old English verse.

At Oxford his precocity as a poet was immediately apparent, and he formed lifelong friendships with two fellow writers, Stephen Spender and Christopher Isherwood. 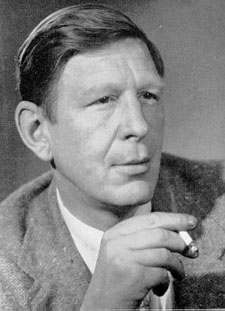 O TELL ME THE TRUTH ABOUT LOVE

Some say that love's a little boy,

And some say it's a bird,

Some say it makes the world go round,

And some say that's absurd,

And when I asked the man next door,

Who looked as if he knew,

His wife got very cross indeed,

And said it wouldn't do.

Or the ham in a temperance hotel?

Does its odour remind one of llamas,

Or has it a comforting smell?

Is it prickly to touch as a hedge is,

Or soft as eiderdown fluff?

Is it sharp or quite smooth at the edges?

Our history books refer to it

It's quite a common topic on

I've found the subject mentioned in

And even seen it scribbled on

The backs of railway guides.

Could one give a first rate imitation

On a saw or a Steinway Grand?

Is its singing at parties a riot?

Will it stop when one wants to be quiet?

I looked inside the summer house,

It wasn't even there,

I tried the Thames at Maidenhead,

I don't know what the blackbird sang,

Or what the tulip said;

But it wasn't in the chicken-run,

Or underneath the bed.

Can it pull extraordinary faces?

Is it usually sick on a swing?

Does it spend all its time at the races,

Or fiddling with pieces of string?

Has it views of its own about money?

Does it think Patriotism enough?

Are its stories vulgar but funny?

When it comes, will it come without warning,

Just as I'm picking my nose?

Will it knock on my door in the morning,

Or tread in the bus on my toes?

Will it come like a change in the weather?

Will its greetings be courteous or rough?

Will it alter my life altogether?

Stop all the clocks, cut off the telephone,

Prevent the dog from barking with a juicy bone,

Silence the pianos and with muffled drum

Bring out the coffin, let the mourners come.

Scribbling on the sky the message He Is Dead,

Put crêpe bows round the white necks of the public doves,

He was my North, my South, my East and West,

My working week and my Sunday rest,

My noon, my midnight, my talk, my song;

I thought that love would last for ever: I was wrong.

The stars are not wanted now: put out every one;

Pack up the moon and dismantle the sun;

Pour away the ocean and sweep up the wood.

For nothing now can ever come to any good.

O the valley in the summer where I and my John

Beside the deep river would walk on and on

While the flowers at our feet and the birds up above

Argued so sweetly on reciprocal love,

And I leaned on his shoulder; 'O Johnny, let's play':

O that Friday near Christmas as I well recall

When we went to the Charity Matinee Ball,

The floor was so smooth and the band was so loud

And Johnny so handsome I felt so proud;

'Squeeze me tighter, dear Johnny, let's dance till it's day':

Shall I ever forget at the Grand Opera

When music poured out of each wonderful star?

Diamonds and pearls they hung dazzling down

Over each silver and golden silk gown;

O but he was fair as a garden in flower,

As slender and tall as the great Eiffel Tower,

When the waltz throbbed out on the long promenade

O his eyes and his smile they went straight to my heart;

O last night I dreamed of you, Johnny, my lover,

You'd the sun on one arm and the moon on the other,

The sea it was blue and the grass it was green,

Every star rattled a round tambourine;

Ten thousand miles deep in a pit there I lay:

But you frowned like thunder and you went away.

THE MORE LOVING ONE

Looking up at the stars, I know quite well

That, for all they care, I can go to hell,

But on earth indifference is the least

We have to dread from man or beast.

How should we like it were stars to burn

With a passion for us we could not return?

If equal affection cannot be,

Let the more loving one be me.

Admirer as I think I am

Of stars that do not give a damn,

I cannot, now I see them, say

I missed one terribly all day.

Were all stars to disappear or die,

I should learn to look at an empty sky

And feel its total dark sublime,