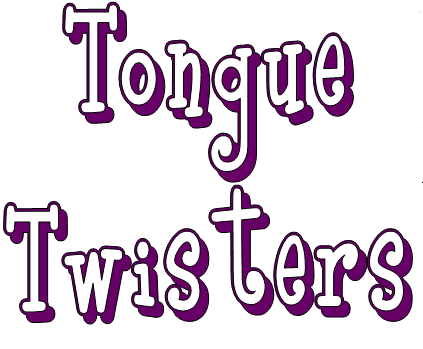 TONGUE TWISTERS are sentences that are difficult to say. They are good pronunciation practice. I originally created this page to give a good group of tongue twisters to people/students who want to work on getting rid of an accent, or to people who just like tongue twisters.

Tongue twisters are a great way to practice and improve pronunciation and fluency. They can also help to improve accents by using alliteration, which is the repetition of one sound.

They’re not just for kids, but are also used by actors, politicians, and public speakers who want to sound clear when speaking. Below, you will find some of the most popular English tongue twisters. Say them as quickly as you can. If you can master them, you will be a much more confident speaker.

I hope you’ll enjoy them. 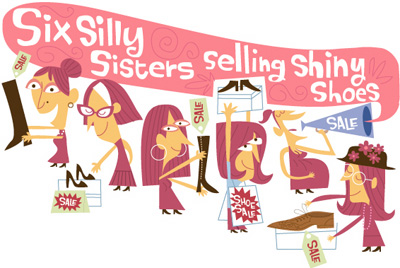 And now a little more difficult:
30. Peter Piper picked a peck of pickled peppers.
Did Peter Piper pick a peck of pickled peppers?
If Peter Piper picked a peck of pickled peppers,
where's the peck of pickled peppers Peter Piper picked?
31. She sells sea shells by the sea shore.
The shells she sells are surely seashells.
So if she sells shells on the seashore,
I'm sure she sells seashore shells.
32. Betty Botter had some butter,
"But," she said, "this butter's bitter.
If I bake this bitter butter,
it would make my batter bitter.
But a bit of better butter
that would make my batter better."
So she bought a bit of butter,
better than her bitter butter,
and she baked it in her batter,
and the batter was not bitter.
So 'twas better Betty Botter
bought a bit of better butter.
33. How much wood would a woodchuck chuck
if a woodchuck could chuck wood?
He would chuck, he would, as much as he could,
and chuck as much wood as a woodchuck would
if a woodchuck could chuck wood.
34. A pleasant place to place a plaice is a place
where a plaice is pleased to be placed.
35. I thought a thought.
But the thought I thought wasn't the thought
I thought I thought.
36. Swan swam over the sea,
Swim, swan, swim!
Swan swam back again
Well swum, swan!
37. The bear could not bear the boar.
The boar thought the bear a bore.
At last the bear could bear no more
Of that boar that bored him on the moor,
And so one morn he bored the boar
That boar will bore the bear no more.
38. A flea and a fly flew up in a flue. (conduit de cheminée)
Said the flea, "Let us fly!"
Said the fly, "Let us flee!"
So they flew through a flaw in the flue.
39. Three grey geese in the green grass grazing.
Grey were the geese and green was the grass.
And to finish for any foreigners who would like to have a go with  these Tongue Twisters in French :
Un chasseur sachant chasser chassait sans son chien de chasse.
Tonton, Ton thé, t'a-t-il ôté ta toux?
Étant sorti sans parapluie, il m'eût plus plu qu'il plût plus tôt.