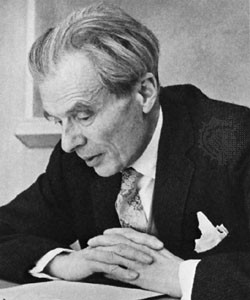 Aldous Huxley was born on July 26th 1894 in Surrey in England to two very aristocratic parents, Leonard and Julia Huxley. Huxley’s family possessed both scientific and literary fame throughout Europe. Indeed young Aldous had much to live up to. As a teenager, Huxley was enrolled in Eton, the legendary university. Soon he developed a bizarre eye disease which left him blind for over two years. Needless to say, this event dramatically changed Huxley, who decided to be a writer instead of a medical doctor.  However, Huxley was no stranger to work, even in the literary world.The great author had an incredibly productive writing career for nearly four decades. Huxley lived and wrote in Italy for much of his early adult life. He contributed to many literary magazines, including Vogue, but soon was forced to flee to America in 1937 to escape Hitler and the Nazis. As Huxley grew as an author, his writing became increasingly serious. He struggled to determine man’s role in society and to find the meaning of his perception. With his most famous work, Brave New World, Huxley proved to be decades ahead of his time. Indeed it would take years for the literary community to finally accept his work for what it was. Eventually Huxley emigrated to the United States where he lived the rest of his days in sunny southern California. As he grew older, Huxley began to experiment with LSD, a mind altering drug he found to be particularly useful for attaining spiritual perception. His later books reflected this interest in man’s relationship with the spiritual world. In 1960 Huxley was diagnosed with throat cancer. His health deteriorated dramatically in the early 1960's. Huxley spent his last days bedridden, almost blind, and unable to speak. On his deathbed he made a written request to his wife for an intramuscular injection of 100 mg of LSD.  Laura Archera Huxley followed his instruction, and Huxley died peacefully a few hours after the injection. That was on November 22nd, 1963, in his home in California. His death was obscured by the news of the assassination of President John F. Kennedy, which occurred on the same day.

The novel opens in the year 632 A.F. (which means After Ford, the God of the New World). All of civilization has been destroyed by a great war. Then there is another war, the Nine Years War, which ushers in the era of Ford, ensuring stability through dictatorship. The society depicted in the novel is based on a rigid caste system. The higher of the five castes enjoy superior tasks, while the lower ones perform menial roles. Ten Controllers hold all the power in this new world and peace is maintained by conditioning infant minds and by soothing adults with the tranquilizer, soma. The population is further controlled through scientific methods; marriage is forbidden, and children are not born but produced in an embryo factory. When the novel begins, some students are being given a guided tour through the London Hatcheries. Henry Foster and Lenina Crowne, two employees of this center, have been dating each other a little too often, going against state rules. Lenina's friend Fanny warns her against such promiscuity. As a result, Lenina decides to date Bernard Marx, who is very intelligent but not quite like the others of his caste. Lenina and Bernard decide to go on a vacation to a Savage Reservation in New Mexico, where people considered unworthy of Utopia are confined. On the reservation, the inhabitants live in an almost primitive manner.

Before Bernard leaves for his vacation, he is warned by Tomakin, the Director of Hatcheries, about his non-conformist ways and threatened with exile to Iceland. Lenina and Bernard accidentally meet Linda and her son, John the Savage, on the Reservation. Bernard learns from John that long ago Linda had come to the Reservation with Tomakin, who had abandoned her there. Discovering herself to be carrying Tomakin's child, she knew that she could not return to Utopia; therefore, she stayed on the Reservation and raised John. Hearing this story, Bernard goes to the Controller and gains his permission to take John and his mother back to Utopia. When Bernard presents the pair to Tomakin, the Director is shattered and resigns from his position at the Hatcheries, having become an object of ridicule. Bernard no longer has to worry about being exiled to Iceland. While living in the custody of Bernard, John becomes the object of everyone's curiosity and amusement. Bernard at first revels in the attention that he receives because of the Savage. Things, however, do not go smoothly. John soon grows repulsed by the ways of the New World and becomes unhappy. Despite his mood, Lenina finds herself terribly attracted to John and tries to seduce him. John, however, fights his physical attraction for her and resists her advances. When his mother dies, John goes crazy. He then tries to convert the Utopians to his way of thinking. Rebellion results. Bernard and Helmholtz Watson are blamed for the rebellion. When the two of them are taken to Mustapha Mond, along with John, Bernard and Helmholtz are exiled. John is retained for further experimentation. He resists and tries to flee into solitude, but the citizens of Utopia continue to hound him. In a fit of misery and depression, John commits suicide.