AESOP was born in the year 620 B. C. in Greece. He was born a slave. When Aesop was granted freedom he raised his status from slavery to one of high respect. He travelled through many countries.

Aesop told his stories to many people throughout his life. These stories were retold and passed down from generation to generation by word of mouth. The fables were not written down for over 200 years. Each of these fables have a lesson to be told.

Many of the fables are a means of political and social criticism. The stories end with a moral to assure the reader understands the message. Over 600 fables are have been collected and written down. Here is a small selection for you to read. 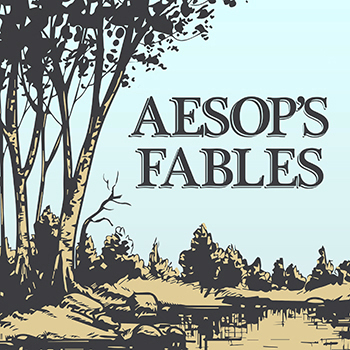 The Father and His Two Daughters
A MAN had two daughters, the one married to a gardener, and the other to a tile-maker.  After a time he went to the daughter who had married the gardener, and inquired how she was and how all things went with her.  She said, "All things are prospering with me, and I have only one wish, that there may be a heavy fall of rain, in order that the plants may be well watered."  Not long after, he went to the daughter who had married the tilemaker, and likewise inquired of her how she fared; she replied, "I want for nothing, and have only one wish, that the dry weather may continue, and the sun shine hot and bright, so that the bricks might be dried."  He said to her, "If your sister wishes for rain, and you for dry weather, with which of the two am I to join my wishes?'
Moral: You can't please everybody.
The Miser
A MISER sold all that he had and bought a lump of gold, which he buried in a hole in the ground by the side of an old wall and went to look at daily.  One of his workmen observed his frequent visits to the spot and decided to watch his movements.  He soon discovered the secret of the hidden treasure, and digging down, came to the lump of gold, and stole it.  The Miser, on his next visit, found the hole empty and began to tear his hair and to make loud lamentations.  A neighbour, seeing him overcome with grief and learning the cause, said, "Pray do not grieve so; but go and take a stone, and place it in the hole, and fancy that the gold is still lying there.  It will do you quite the same service; for when the gold was there, you had it not, as you did not make the slightest use of it."
Moral: The true value of money is not in its possession but in its use.
The Dove And The Ant
An Ant, going to a river to drink, fell in, and was carried along in the stream. A Dove pitied her condition, and threw into the river a small bough, by means of which the Ant gained the shore. The Ant afterward, seeing a man with a fowling-piece aiming at the Dove, stung him in the foot sharply, and made him miss his aim, and so saved the Dove's life.
Moral: Little friends may prove great friends.
The Hares And The Frogs
The Hares were so persecuted by the other beasts, they did not know where to go.  As soon as they saw a single animal approach them, off they used to run.  One day they saw a troop of wild Horses stampeding about, and in quite a panic all the Hares scuttled off to a lake hard by, determined to drown themselves rather than live in such a continual state of fear.  But just as they got near the bank of the lake, a troop of Frogs, frightened in their turn by the approach of the Hares scuttled off, and jumped into the water.  "Truly," said one of the Hares, "things are not so bad as they seem.
Moral: There is always someone worse off than yourself. 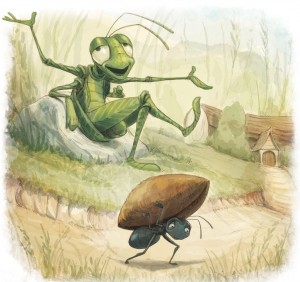 The Ant And The Grasshopper

In a field one summer's day a Grasshopper was hopping about, chirping and singing to its heart's content. An Ant passed by, bearing along with great toil an ear of corn he was taking to the nest. "Why not come and chat with me," said the Grasshopper, "instead of toiling and moiling in that way?""I am helping to lay up food for the winter," said the Ant, "and recommend you to do the same.""Why bother about winter?" said the Grasshopper; we have got plenty of food at present." But the Ant went on its way and continued its toil. When the winter came the Grasshopper had no food and found itself dying of hunger, while it saw the ants distributing, every day, corn from the stores they had collected in the summer.Then the Grasshopper knew: It is best to prepare for the days of necessity.

The Father And His Sons
A FATHER had a family of sons who were perpetually quarreling among themselves. When he failed to heal their disputes by his exhortations, he determined to give them a practical illustration of the evils of disunion; and for this purpose he one day told them to bring him a bundle of sticks. When they had done so, he placed the faggot into the hands of each of them in succession, and ordered them to break it in pieces. They tried with all their strength, and were not able to do it. He next opened the faggot, took the sticks separately, one by one, and again put them into his sons' hands, upon which they broke them easily. He then addressed them in these words: "My sons, if you are of one mind, and unite to assist each other, you will be as this faggot, uninjured by all the attempts of your enemies; but if you are divided among yourselves, you will be broken as easily as these sticks."
The Hare And The Tortoise
The Hare was once boasting of his speed before the other animals.  "I have never yet been beaten," said he, "when I put forth my full speed.  I challenge any one here to race with me." The Tortoise said quietly, "I accept your challenge.""That is a good joke," said the Hare; "I could dance round you all the way.""Keep your boasting till you've beaten," answered the Tortoise.  "Shall we race?"  So a course was fixed and a start was made.  The Hare darted almost out of sight at once, but soon stopped and, to show his contempt for the Tortoise, lay down to have a nap.  The Tortoise plodded on and plodded on, and when the Hare awoke from his nap, he saw the Tortoise just near the winning-post and could not run up in time to save the race.  Then said the Tortoise: "Plodding wins the race."
Belling The Cat
Once upon a time, all the mice met, together in council, to discuss the best means of securing themselves against the attacks of the cat. After several suggestions had been debated, a Mouse of some standing and experience got up and said, "I think I have hit upon a plan which will ensure our safety in the future, provided you approve and carry it out. It is that we should fasten a bell around the neck of our enemy the cat, which will, by its tinkling, warn us of her approach." This proposal was warmly applauded, and it had been decided to adopt it, when an old Mouse got upon his feet and said, "I agree with you all that the plan before us is an admirable one: but may I ask who is going to bell the cat?" It is easy to propose impossible remedies.
The Frog And The Ox
"Oh Father," said a little Frog to the big one sitting by the side of a pool, "I have seen such a terrible monster! It was big as a mountain, with horns on its head, and a long tail, and it had hoofs divided in two." Tush, child, tush," said the old Frog, "that was only Farmer White's Ox. It isn't so big either; he may be a little bit taller than I, but I could easily make myself quite as broad; just you see." So he blew himself out, and blew himself out, and blew himself out. "Was he as big as that?" asked he. "Oh, much bigger than that," said the young Frog. Again the old one blew himself out, and asked the young one if the Ox was as big as that. "Bigger, Father, bigger," was the reply. So the Frog took a deep breath, and blew and blew and blew, and swelled and swelled. And then he said, "I'm sure the Ox is not as big as this." But at that moment he burst.
Self-conceit may lead to self-destruction.