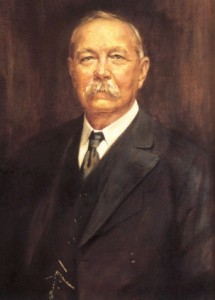 Arthur Conan Doyle was born in Edinburgh on May 22nd 1859. He was born to an affluent, strict Irish-Catholic Scottish family. His father, Charles, who was a life-long alcoholic. Doyle's mother, Mary, was a lively and well-educated woman who loved to read. She particularly delighted in telling her young son outlandish stories. At the age of 9, Doyle left his parents and was sent to England, where he would attend Hodder Place, Stonyhurst - a Jesuit preparatory school - from 1868 to 1870. For Doyle, the boarding-school experience was brutal: many of his classmates bullied him, and the school practiced ruthless corporal punishment against its students. When Doyle graduated from Stonyhurst College in 1876, he decided to pursue a medical degree degree at the University of Edinburgh. At med school, Doyle met his mentor, Professor Dr. Joseph Bell, whose keen powers of observation would later inspire Doyle to create his famed fictional detective character, Sherlock Holmes. During Doyle's third year of medical school, he took a ship surgeon's post on a whaling ship sailing for the Arctic Circle. The voyage awakened Doyle's sense of adventure. In 1880, Doyle returned to medical school. Back at the University of Edinburgh, Doyle became increasingly invested in Spiritualism or "Psychic religion," a belief system that he would later attempt to spread through a series of his written works. By the time he received his Bachelor of Medicine degree in 1881, Doyle had denounced his Roman Catholic faith. After a medical practice at Southsea between 1882 and 1890 in which he was only moderately successful, he took to writing. His works include a number of short stories and romances, but his greatest popular triumph was Sherlock Holmes. Holmes was the master of the minute observation who was inevitably forced to explain his techniques in detail to his sidekick Dr. Watson. In 1885, while still struggling to make it as a writer, Doyle met and married his first wife, Louisa Hawkins. The couple moved to Upper Wimpole Street and had two children, a daughter and a son. In 1893, Louisa was diagnosed with tuberculosis. While Louisa was ailing, Doyle developed an affection for a young woman named Jean Leckie. Louisa ultimately died of tuberculosis in Doyle's arms, in 1906. The following year, Doyle would remarry to Jean Leckie, with whom he would have two sons and a daughter. Doyle continued to actively participate in the Spiritualist movement from 1887 to 1916. Having  been diagnosed with Angina Pectoris, Doyle stubbornly ignored his doctor's warnings, and in the fall of 1929, embarked on a spiritualism tour through the Netherlands. He returned home with chest pains so severe that he needed to be carried on shore, and was thereafter almost entirely bedridden at his home in Crowborough, England. On July 7, 1930, Doyle collapsed and died in his garden while clutching his heart with one hand and holding a flower in the other.

The story begins on Baker Street where Sherlock Holmes and Watson are trying to figure out who left a walking stick at Holmes's residence and as they figure out whose it is, its owner arrives. The cane belongs to Dr. Mortimier, who has rumours of a new mystery for famous Sherlock to solve. The mystery involves what seems to be a supernatural hound that is the cause of the deaths of a line of related Baskerville men. The stories began a few generations before Sherlock Holmes's era. Hugo Baskerville was killed while riding out upon the moor. Witnesses had stated that he was mauled to death by a huge, supposedly supernatural hound. The mystery of Hugo's death was always thought upon, but the mystery was never solved, and soon only the stories and superstition had remained. That is until recently a descendant of Hugo Baskerville, Sir Charles was found dead on the moor right out side his house (Baskerville Hall), scared to death. Superstitious Mortimier is giving this information to Sherlock Holmes because he fears for his friend's life (Sir Henry). Sir Henry is, at the beginning unbelieving of the Baskerville curse, but Mortimier thinks that Sherlock will be able to solve the mystery and take Sir Henry Baskerville's life out of danger.

It introduced Holmes to the world, and Holmes and Watson to each other. Indeed, it is the first story to feature the character of Sherlock Holmes, who would later become one of the most famous and iconic literary detective characters, with long-lasting interest and appeal. The book's title derives from a speech given by Holmes to his companion Doctor Watson on the nature of his work, in which he describes the story's murder investigation as his 'study in scarlet': "There’s the scarlet thread of murder running through the colourless skein of life, and our duty is to unravel it, and isolate it, and expose every inch of it." Watson meets the great detective Sherlock Holmes and together they solve a case of murder, in which Watson is amazed at Holmes' "science of deduction".The novel is split into two quite separate halves. The first is titled "Being a Reprint from the Reminiscences of John Watson, M.D., Late of the Army Medical Department". This part is told in first person by Sherlock Holmes' friend Dr Watson, and describes his introduction in 1881 to Holmes through a mutual friend and the first mystery in which he followed Holmes' investigations. The mystery revolves around a corpse found at a derelict house in Brixton, England with the word "RACHE" scrawled in blood on the wall beside the body.