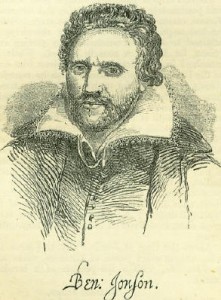 Ben Jonson was born circa June 11th 1572 in or near London. His Protestant father - who had been imprisoned and deprived of his estate during the Catholic reign of Mary Tudor - had died only a month earlier, and his mother, left penniless and with no means of supporting her young son, was forced to marry a bricklayer. His stepfather made him work in the more practical business of bricklaying. Jonson also spent some time as a soldier and a travelling actor. But despite these tragic beginnings, it was for his humour that Ben Jonson would be known. At Westminster school, the scholar Camden recognized Jonson's exceptional literary gifts and took the young man under his tutelage.Though Jonson never received a university education, Camden's instruction proved more than adequate. He became one of the most learned men of Elizabethan times and eventually received honorary degrees from both universities. In 1592, he married a woman sometime between 1592 and 1595. whom he would later describe as "a shrew, yet honest." In 1596, she gave birth to a son whom Jonson called his "best piece of poetry." He was devestated when the young boy was struck down with the plague at the age of seven. Jonson plunged himself into the bohemian life of the city, drank a lot, acted (badly), and adapted two Roman comedies in The Case Is Altered. But it was not until 1598 that he finally emerged from the crowd of unrecognized playwrights with Every Man in His Humour. Dedicated to Master Camden, Every Man in His Humour is a masterpiece of its kind. It draws a telling portrait of the follies of the time - one huge canvas of the Elizabethan age. But disaster quickly followed. Jonson fell into a quarrel with the actor Gabriel Spencer and, in a duel, killed the man, though his blade was ten inches shorter than Spencer's. He was imprisoned and very nearly put to death. At the last moment, he was granted a reprieve and released, but his property was confiscated, and he was branded on the thumb. His release was celebrated by the performance of his new play Every Man Out of His Humour. Although often guilty of petty quarrels with his fellow playwrights, Jonson collaborated with John Marston and George Chapman on Eastward Ho!, a script which would land them all in prison once again. The play contains an unflattering reference to Scottish royalty to which the new king, James I, took offense. Chapman and Marston were thrown into prison, and Jonson joined them there voluntarily, claiming equal responsibility for the play. In the end, they were spared - probably because of the new-found popularity Jonson was beginning to enjoy as a writer of masques for the court. The next year, Jonson produced what is generally considered to be his masterpiece. In Volpone, a rich merchant hits upon the scheme of faking his own death in order to swell his coffers with gifts. Sickened by the greed which was becoming a predominant feature of the economic system, Jonson is no longer simply drawing an amusing picture of Elizabethan times, he is flatly assailing the morals of the age. Jonson lived on long after his friend Shakespeare had passed away. He continued to write, piling comedy on comedy. He died on August 6th 1637 but because he was considered one of the most accomplished writers of the time, he was given the special honor of being buried in Westminster Abbey, in England.

The Alchemist is one of Ben Jonson's more popular comedies. Cony-catching or swindling (a cony was another word for dupe, gull, or victim) was as popular in the seventeenth century as it is in the twentieth. The con or swindle was a familiar theme and one which Jonson found to be a natural topic for comedy. There is little known about audience reaction to any of Jonson's plays. There were no theatre reviews and no newspapers or magazines to report on the opening of a play. The little that is known is drawn from surviving letters and diaries. But Jonson was not as popular with theatre-goers as William Shakespeare. In general, Jonson's plays were not well received by audiences, but The Alchemist appears to have been more popular than most, probably because of its topic. Jonson differed from other playwrights of his period in that he did not use old stories, fables, or histories as the sources for his plays. Instead, Jonson used a plot "type" as the basis for most of his drama. In The Alchemist the plot is the familiar one of a farce. The characters are common, a man or men and a woman who set up the swindle. The victims offer a selection of London society. Like the characters from Geoffrey Chaucer's Canterbury Tales, there are religious men, a clerk and a shopkeeper, a widow, a knight, and a foolish young man. Jonson's characters are not well-defined, nor do they have any depth. Instead, they are "types" familiar to the audience. The initial popularity of The Alchemist diminished in subsequent years; by the eighteenth century the play was rarely being produced. As is the case with most of Jonson's plays, The Alchemist has been rarely produced outside of England during the twentieth century.

The Silent Woman is an extremely funny if slightly dark play that focuses on a wealthy old man named Morose and his efforts to marry and produce an heir. Morose is an odd sort of fellow. He can stand no noise and has gone to great lengths to keep his home as quiet as possible. The walls of his home are completely padded and he insulates himself further by going around with several stocking caps on his head. Even his manservant is forbidden to speak. Dressed in padding from head to toe, the poor man must communicate with his eccentric employer by the tap of a padded foot. It is no wonder that Morose is ecstatic when he meets Epicoene. She is known throughout the town as a "silent woman." Morose quickly proposes and feels secure in the assumption that this woman will provide him with the serene life he desires. However, Morose soon finds out that his assumption was way off the mark. The play is filled with gags and pranks that are extremely entertaining.

The purpose of Volpone is to teach lessons about greed. The topic is quite serious, although this is comedy, and there are many moments of humor in the play, especially when Volpone is feigning illness and lies disguised. This play is, in many ways, a play within a play. Volpone and Mosca are actors playing roles throughout, but they are also directors leading the three fortune hunters, Corvino, Voltore, and Corbaccio, through their performances. Jonson differed from other playwrights of the period in that he did not use old stories, fables, or histories as the sources for his plays. Instead, Jonson used a plot "type" as the source for most of his plays. In Volpone, the plot is the familiar one of a swindle. The action is set in Venice, which many Englishmen thought was a center of debauchery and sin. Jonson's characters are not well defined, nor do they have any depth. Instead, they are "types" familiar to the audience: the dishonest lawyer, the jealous old husband married to a beautiful young girl, and the miserly old man who cannot be satisfied until he can amass even more money. Volpone is considered Jonson's most popular work, since it is the one most frequently staged.