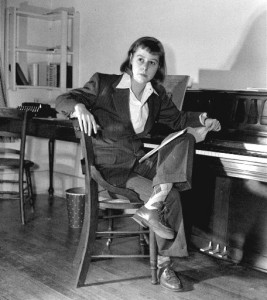 She was born on February 19th 1917 as the daughter of Lamar Smith, a watchmaker and jeweller, and his wife Vera Marguerite Waters. As a little girl, She aspired to be a musician and her parents arranged for her to receive piano classes form the age of ten. She attended Columbus High School.She travelled to New York City where she planned to study piano at the Julliard School of Music in 1934. However, she returned home and fell ill with rheumatic fever.  The illness left her unable to pursue a career as a professional musician and she was forced to consider other professions. She studied creative writing at night classes at Columbia University under the Texas writer Dorothy Scarborough. She left Georgia and the South at seventeen and lived mainly in New York and Paris for all her adult life.She began writing seriously by her late teens. Her first published work was an autobiographical piece called ‘Wunderkind’ which was about a musical prodigy’s painful life experiences. The story first appeared in the December 1936 issue of ‘Story’ magazine.For two years from 1935 till 1937, she divided her time between Columbus and New York in order to work on her studies and writing. She also worked at several odd jobs to support herself. She married an aspiring writer Reeves McCullers in 1937. The couple separated in 1940 and divorced in 1941. Carson and Reeves remarried in 1945. The marriage was a tempestuous one, marked by separations and reunions, divorce and remarriage, alcoholism and suicide attempts. Reeves McCullers died in 1953 from an overdose of alcohol and barbituates, an apparent suicide. She published her debut novel ‘The Heart is a Lonely Hunter’ in 1940. The novel was highly reviewed by critics and was also a huge commercial success. The very next year, the novel ‘Reflections in a Golden Eye’ was released. The novel had first appeared in a serialized format in the October-November issues of the ‘Harper’s Bazaar’ in 1940. It took her five years to complete her next novel ‘The Member of the Wedding’ which was finally published in 1946. She once attempted suicide when she was depressed. Some years later her husband convinced her to attempt suicide with him. But she fled while Reeves committed suicide.She suffered from health problems throughout her life. She was partially paralyzed by the age of 31. She died of a brain hemorrhage on September 29th 1967.

Critics have detected Gothic elements in her work, which is frequently tinged with the macabre. She wrote that her central theme was "spiritual isolation". The novel takes place at an army base in the U.S. state of Georgia. Private Ellgee Williams, a solitary man full of secrets and desires, has served for two years and is assigned to stable duty. After doing yard work at the home of Capt. Penderton, he sees the captain's wife nude and becomes obsessed with her. Capt. Weldon Penderton and his wife Leonora, a feeble-minded Army brat, have a fiery relationship and she takes in many lovers. Leonora's current lover, Major Morris Langdon, lives with his depressed wife Alison and her flamboyant Filipino houseboy Anacleto, near the Pendertons. Capt. Penderton, as a closeted homosexual, realizes that he is physically attracted to Pvt. Williams, but remains unaware of the private's attraction to Leonora.

The Ballad of the Sad Cafe opens in a small, isolated Georgia town. The story introduces Miss Amelia Evans, a strong character of both body and mind, who is approached by a hunchbacked man with only a suitcase in hand who claims to be of kin. When Miss Amelia, whom the townspeople see as a calculating woman who never acts without reason, takes the stranger into her home, rumors begin to circulate that Miss Amelia has only done so to take what the hunchback had in his suitcase. When the rumors hit their peak, a group of eight men come to her store, sitting outside on the steps for the day and waiting to see if something would happen. Finally, they enter the store all at once and are stunned to see that the hunchback is actually alive and well. With everyone gathered inside, Miss Amelia brings out some liquor and crackers in hospitality, which further shocks the men, as they have never witnessed Miss Amelia be hospitable enough to allow drinking inside her home. This is essentially the beginning of the café. Miss Amelia and the hunchback, Cousin Lymon, unintentionally create a new tradition for the town, and the people gather inside at the café on Sunday evenings often until midnight. It is apparent, though surprising, to the townspeople that Miss Amelia has fallen in love with Cousin Lymon, and has begun to change slightly as time progresses. When the townspeople see this, they relate it to another odd incident in which Miss Amelia was also involved: the issue of her ten-day marriage. Miss Amelia had been married to a man named Marvin Macy, who was a vicious and cruel character before meeting and falling in love with her. He changed his ways and became good-natured, but reverted to his old self when his love was rejected after a failed ten-day marriage in which he gave up everything he possessed in hopes of having her return his affections. He broke out into a rage, committing a string of felonies before being caught and locked up in the state penitentiary. When he was released, he returned to the town with the full intention of ruining Miss Amelia's life the way she ruined his. Upon his return, he takes advantage of Cousin Lymon's admiration for him, as he views Macy as a true man, and uses him to crush Miss Amelia's heart. Macy and Miss Amelia engage in a physical fight, and just as Miss Amelia is about to take the upper hand, Lymon jumps her from behind allowing Macy to prevail. Macy and Cousin Lymon ransack the café, break her still, steal her curios and money, and disappear from town leaving Miss Amelia alone to herself.The novella ends with The Twelve Mortal Men, which is a brief passage of twelve men in a chain-gang, whose actions outline that of what happened in the lonely rural town, and highlights the themes of loneliness and isolation.