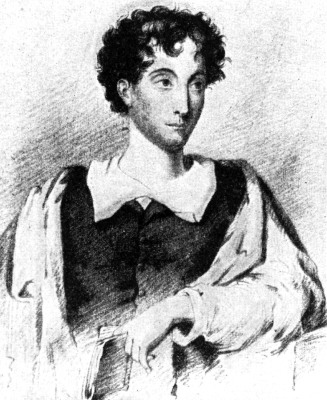 Charles Robert Maturin (MAT-choo-ruhn) was born on 25th September 1782, one of several children born to William Maturin and Fidelia Watson. He was the son of an official in the Irish post office and the grandson of Gabriel Maturin, who had been Jonathan Swift’s successor as dean of St. Patrick’s, Dublin. The Maturin family was of French descent. One of their ancestors was a Huguenot priest who was forced to leave France because of religious persecution during the reign of Louis XIV. This aspect of his family history strongly impressed the young Maturin, and throughout his life he was fond of relating how his ancestors had suffered for their faith. He himself was strongly anti-Catholic and especially opposed to the rule of monastic life, which he considered dangerously repressive. His novels contain many scenes and descriptions of monasteries as sadistic places where virtue turns to vice.

When in Ireland, Maturin’s family became closely connected with the Anglican Church. Maturin’s great-grandfather, Peter Maturin, was dean of Killala from 1724 to 1741, and his grandfather, Gabriel James Maturin, succeeded Jonathan Swift as dean of St. Patrick’s in Dublin in 1745. Following this tradition, Maturin entered Trinity College in 1795 to study theology, and in 1803 he took holy orders. In the same year, he married Henrietta Kingsbury, a daughter of the archdeacon of Killala. From all reports, the couple were well suited and happily married. After ordination, Maturin served as curate in Loughrea, Galway, for two years. He then returned to Dublin to become curate of St. Peter’s, a position he held for the rest of his life. His small income from this curacy was insufficient to support his family, especially after his father was accused of fraud and dismissed from his position with the Irish post office in 1809. Later, he was cleared and given another position, but for a time, the family struggled in severe poverty. In fact, Maturin was continually troubled by financial. He married on 7th October 1804 the acclaimed singer Henrietta Kingsbury.The Church of Ireland took note of earlier criticisms and, having discovered the identity of Bertram's author (Maturin had shed his nom de plume to collect the profits from the play), subsequently barred Maturin's further clerical advancement. Forced to support his wife and four children by writing (his salary as curate was £80-90 per annum, compared to the £1000 he made for Bertram), he switched back from playwright to novelist after a string of his plays met with failure. He produced several novels in addition to Melmoth the Wanderer, including some on Irish subjects and The Albigenses, a historical novel which features werewolves.

Melmoth the Wanderer is his masterpiece and one of the most famous of the gothic romances popular in the early nineteenth century. It so impressed Honoré de Balzac that he wrote a sequel, Melmoth réconcilié (1835). Charles Baudelaire was also an admirer of Maturin’s novel, equating it with the poetry of Byron and Edgar Allan Poe. Oscar Wilde, during his travels after release from prison, called himself Sebastian Melmoth, deriving this pseudonym from the title character in his great-uncle's novel and from Saint Sebastian.

The novel's titular character is a scholar who sold his soul to the devil in exchange for 150 extra years of life, and searches the world for someone who will take over the pact for him, in a manner reminiscent of the Wandering Jew.

The novel is composed of a series of nested stories-within-stories, gradually revealing the story of Melmoth's life. The novel offers social commentary on early-19th-century England, and denounces Roman Catholicism in favour of the virtues of Protestantism.

John Melmoth, a student in Dublin, visits his dying uncle. He finds a portrait of a mysterious ancestor called "Melmoth"; the portrait is dated 1646. At his uncle's funeral, John is told an old family story about a stranger called Stanton who arrived looking for 'Melmoth the Traveller' decades earlier.

A manuscript left by Stanton describes his first finding Melmoth laughing at the sight of two lovers who have been struck by lightning, and hearing of a wedding at which Melmoth was an uninvited guest: the bride died and the bridegroom went mad. Stanton's search for Melmoth is deemed to be madness and he is sent to a madhouse. Melmoth visits him there, and offers to free him, but Stanton refuses and escapes.

Following his uncle's wish, John burns the Melmoth portrait. He is visited by Melmoth in a dream, and later sees Melmoth laughing at a shipwreck. John tries to approach him, but slips and falls into the sea. He is saved from drowning by the sole survivor of the wreck, a Spaniard Alonzo Monçada. Alonzo Monçada tells his story, in which his family confines him to a monastery. He is mistreated by the monks, and his brother Juan arranges for him to escape with the help of a fellow monk, a parricide. The escape plan is a trap and Juan is killed. Monçada is taken to the prison of the Inquisition. There he is visited in his cell by Melmoth, who says he will help him escape. A fire breaks out, and in the confusion Monçada escapes. He meets a venerable Jewish scholar, Adonijah, who lives in a secret chamber decorated with the skeletons of his own family. In exchange for food and shelter, Adonijah compels Monçada to transcribe a manuscript for him: 'the Tale of the Indians'.Monks drag a young man across the floor of a vaulted room, presenting him to a seated bishop.The Tale of the Indians tells of an island in the Indian Ocean which is rumored to be haunted by a white goddess named 'Immalee'. In reality, Immalee is a castaway who grew up alone on the island, isolated from humanity. She is visited by Melmoth, who tells her he comes from 'the world that suffers'. He tries to destroy her innocence, showing her the shortcomings of human societies and religions. She falls in love with him and begs him to stay with her, but he departs. Three years later, Immalee - now named Isidora - has been restored to her family in Madrid. Melmoth reappears and he and Isadora elope by night; he leads her to a remote chapel where they are married by an undead hermit.

Isidora's father encounters a stranger at an inn who tells him The Tale of Guzman's Family. Guzman is a wealthy Spanish merchant whose sister marries a poor German musician, Walberg. Guzman decides to make Walberg's family his heirs, but his will leaves everything to the church, and the family sinks into poverty; almost insane, Walberg decides to end their poverty by killing them all - but before he does so, news arrives that the true will has been found and the family is saved. By this point in the story, Isidora's father has fallen asleep, and wakes to find the stranger at the inn replaced by Melmoth. Melmoth tells him The Lovers' Tale, about a young woman in Yorkshire named Elinor, who is jilted at the altar, and is subsequently tempted by Melmoth, but refuses his help.

The Tale of the Indians resumes: Isidora returns to her family, but she is pregnant with Melmoth's child. She has a presentiment that she will not live, and gets Melmoth to promise that the child will be raised as a Christian. Isidora's father finds a husband for her, but in the middle of the wedding celebrations, Melmoth tries to abduct Isidora. Her brother tries to intervene, and Melmoth kills him. Isidora falls senseless and Melmoth escapes. Isidora reveals that she is already married, to Melmoth. She gives birth, but she and her baby daughter are imprisoned by the Inquisition. The inquisitors threaten to take away the child, but find that it is already dead. Isidora, dying of grief, remembers her island paradise, and asks if 'he' will be in the heavenly paradise.

Monçada and John are interrupted by the appearance of Melmoth himself. He confesses to them his purpose on Earth, that his extended life is almost over, and that he has never been successful in tempting another into damnation: "I have traversed the world in the search, and no one to gain that world, would lose his own soul!" Melmoth has a dream of his own damnation, and of the salvation of Stanton, Walberg, Elinor, Isidora and Monçada. He asks John and Monçada to leave him alone for his last few hours of mortal existence. They hear terrible sounds from the room, but when they enter, the room is empty. They follow Melmoth's tracks to the top of a cliff, and see his handkerchief on a crag below them. "Exchanging looks of silent and unutterable horror", they return home.