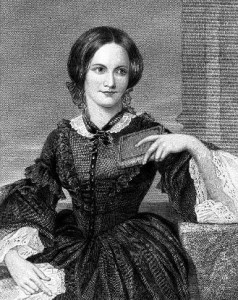 Charlotte Brontë was born 21st April 1816 in Haworth Parsonage on the Yorkshire moor, the third of Patrick and Maria Branwell Brontë's six children.  In 1821, Maria Branwell died, leaving her five daughters and one son motherless.  Charlotte and Maria and Elizabeth, her two older sisters, were sent to Cowan Bridge Clergy Daughter's School, where the bad conditions caused Maria and Elizabeth to be sent home with the consumption that killed them in 1825.  Charlotte and Emily went to school in Brussels in 1842 for less than two years.  Charlotte began writing mythology with Emily and Anne when they were children, and in 1846 the three sisters published a book of Poems under the pseudonyms Currer, Ellis and Acton Bell.  The good reviews encouraged them to continue their writing, and soon plays, serial stories and other writings emerged. Charlotte's novel The Professor did not do well, but Jane Eyre, published in 1847 under the pseudonym Currer Bell, was a success. Tragedy followed the next two years however, when Charlotte's brother Branwell died in 1848 connected with his heavy drinking and Emily died later in the year of consumption.  Anne's death followed in 1849, also of consumption.  Charlotte's novel Shirley (1849) presents some of her grief from this time.  After the deaths, Charlotte spent some time in London with friends, particularly the writer Thackeray.  In 1854 Charlotte married Arthur Bell Nicholls, her father's curate, and on March 31st 1855 she died in pregnancy. She lived longer than her sisters, but she was only 38 when she died.

Jane Eyre is a love story. It tells about a young woman called Jane Eyre who was an orphan and goes to teach a girl named Adele Varens in a far-away house. The master of the house is Mr. Rochester. Jane and Mr. Rochester fall in love, but Jane is horrified when she finds out Mr. Rochester is already married to a crazy woman who lives in the attic. She leaves the house, believing that marrying him would now be the same as adultery and that she would be his mistress, not his wife. When she goes away, she becomes sick and almost dies. Three people, Diana, Mary, and St. John Rivers, find her and let her live with them. There, she becomes a teacher and finds out that they are her cousins. She is very happy until St. John wants her to marry him and be a missionary with him. She knows that he does not really love her and thinks she is simply useful, so she says no. However, he continues to ask her, and she is finally almost persuaded that it is her duty to marry him when she hears Mr. Rochester crying, "Jane! Jane!" She feels that something has happened to him, and quickly goes back to see him. His crazy wife had put his house on fire and died in it. Mr. Rochester, because of the fire, had become blind and wounded. Jane, now that his wife is dead, is happy to marry him, and they get married and have a son. This passionate love story caused a scandal when it was published.