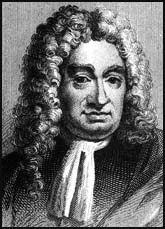 Daniel Defoe, the son of a butcher called James Foe, was born in London circa 1660. Daniel later changed his name to Daniel Defoe, wanting to sound more gentlemanly. He attended Morton's Academy, a school for Dissenters at Newington Green with the intention of becoming a minister, but he changed his mind and became a merchant instead. He traveled often, selling such goods as wine and wool, but was rarely out of debt. He went bankrupt in 1692 (paying his debts for nearly a decade thereafter), and by 1703, decided to leave the business industry altogether. In 1688 Defoe took part in the Monmouth Rebellion and joined William III and his advancing army. Defoe became popular with the king after the publication of his poem, The True Born Englishman (1701). The poem attacked those who were prejudiced against having a king of foreign birth. The publication of Defoe's The Shortest Way with the Dissenters (1702) upset a large number of powerful people. In the pamphlet, Defoe, a Dissenter, ironically demanded the savage suppression of dissent. The pamphlet was judged to be critical of the Anglican Church and Defoe was fined, put in the Charing Cross Pillory and then sent to Newgate Prison. In 1703 Robert Harley, Earl of Oxford, a Tory government official, employed Defoe as a spy. With the support of the government, Defoe started the newspaper, The Review. Published between 1704 and 1713, the newspaper appeared three times a week. As well as carrying commercial advertising The Review reported on political and social issues. Defoe also wrote several pamphlets for Harley attacking the political opposition. The Whigs took Defoe court and this resulted in him serving another prison sentence. In 1719 Defoe turned to writing fiction. Defoe also wrote a three volume travel book, Tour Through the Whole Island of Great Britain (1724-27) that provided a vivid first-hand account of the state of the country. Defoe published over 560 books and pamphlets and is considered to be the founder of British journalism. Daniel Defoe died on April 24th2 1731.

Robinson Crusoe defied his parents and went to sea. He was involved in a series of violent storms at sea and was warned by the captain that he should not be a seafaring man. Ashamed to go home, Crusoe boarded another ship and returned from a successful trip to Africa. Taking off again, Crusoe met with bad luck and was taken prisoner in Sallee. His captors sent Crusoe out to fish, but he used this to escape, along with a slave. He was rescued by a Portuguese ship and started a new adventure. He landed in Brazil, and, after some time, he became the owner of a sugar plantation. Hoping to increase his wealth by buying slaves, he aligned himself with other planters and undertook a trip to Africa in order to bring back a shipload of slaves. After surviving a storm, Crusoe and the others were shipwrecked. He was thrown upon shore only to discover that he was the sole survivor of the wreck. Crusoe made immediate plans for food, and then shelter, to protect himself from wild animals. He brought as many things as possible from the wrecked ship, things that would be useful later to him. In addition, he began to develop talents that he had never used in order to provide himself with necessities. Cut off from the company of men, he began to communicate with God, thus beginning the first part of his religious conversion. To keep his sanity and to entertain himself, he began a journal. In the journal, he recorded every task that he performed each day since he had been marooned. As time passed, Crusoe became a skilled craftsman, able to construct many useful things, and thus furnished himself with diverse comforts. He also learned about farming, as a result of some seeds which he brought with him. An illness prompted some prophetic dreams, and Crusoe began to reappraise his duty to God. Crusoe explored his island and discovered another part of the island much richer and more fertile, and he built a summer home there. One of the first tasks he undertook was to build himself a canoe in case an escape became possible, but the canoe was too heavy to get to the water. He then constructed a small boat and journeyed around the island. Crusoe reflected on his earlier, wicked life, disobeying his parents, and wondered if it might be related to his isolation on this island.  After spending about fifteen years on the island, Crusoe found a man's naked footprint, and he was sorely beset by apprehensions, which kept him awake many nights. He considered many possibilities to account for the footprint and he began to take extra precautions against a possible intruder. Sometime later, Crusoe was horrified to find human bones scattered about the shore, evidently the remains of a savage feast. He was plagued again with new fears. He explored the nature of cannibalism and debated his right to interfere with the customs of another race. Crusoe was cautious for several years, but encountered nothing more to alarm him. He found a cave, which he used as a storage room, and in December of the same year, he spied cannibals sitting around a campfire. He did not see them again for quite some time. Later, Crusoe saw a ship in distress, but everyone was already drowned on the ship and Crusoe remained companionless. However, he was able to take many provisions from this newly wrecked ship. Sometime later, cannibals landed on the island and a victim escaped. Crusoe saved his life, named him Friday, and taught him English. Friday soon became Crusoe's humble and devoted slave. Crusoe and Friday made plans to leave the island and, accordingly, they built another boat. Crusoe also undertook Friday's religious education, converting the savage into a Protestant. Their voyage was postponed due to the return of the savages. This time it was necessary to attack the cannibals in order to save two prisoners since one was a white man. The white man was a Spaniard and the other was Friday's father. Later the four of them planned a voyage to the mainland to rescue sixteen compatriots of the Spaniard. First, however, they built up their food supply to assure enough food for the extra people. Crusoe and Friday agreed to wait on the island while the Spaniard and Friday's father brought back the other men.  A week later, they spied a ship but they quickly learned that there had been a mutiny on board. By devious means, Crusoe and Friday rescued the captain and two other men, and after much scheming, regained control of the ship. The grateful captain gave Crusoe many gifts and took him and Friday back to England. Some of the rebel crewmen were left marooned on the island. Crusoe returned to England and found that in his absence he had become a wealthy man. After going to Lisbon to handle some of his affairs, Crusoe began an overland journey back to England. Crusoe and his company encountered many hardships in crossing the mountains, but they finally arrived safely in England. Crusoe sold his plantation in Brazil for a good price, married, and had three children. Finally, however, he was persuaded to go on yet another voyage, and he visited his old island, where there were promises of new adventures to be found in a later account.

Many critics have speculated that Defoe’s story of a beautiful and greedy woman who turns to crime is not a novel in the true sense but a work combining biography and fiction. Defoe (and others) wrote numerous accounts of various women in early 18th  century London named Moll who made their fame as thieves and pickpockets, and the criminal records of that period in London reveal the accounts of women who were arrested for stealing. Many critics and historians argue that a woman named Elizabeth Atkins, a notorious thief who died in prison in 1723, was one of Defoe’s inspirations for the character of Moll Flanders. Whatever the sources of Defoe’s popular work may have been, the novel has endured nearly three hundred years of changing tastes and mores and has secured its author’s position as one of the most well-respected English writers and, some say, as the father of the novel form.