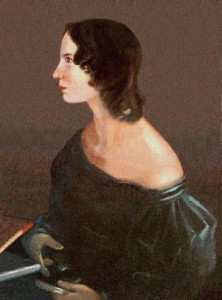 Emily Brontë was born on July 30th, 1818 in Thornton, England on the Yorkshire moor, the fifth of Patrick and Maria Branwell Brontë’s six children. In 1920 the family moved to Haworth. In 1821 Maria Branwell died, leaving Maria, Elizabeth, Charlotte, Emily, Anne, and Branwell motherless. Emily, Charlotte, Maria and Elizabeth were sent to Cowan Bridge Clergy Daughter’s School, where the bad conditions caused Maria and Elizabeth to be sent home with the tuberculosis that killed them in 1825. In 1837 Emily spent some time teaching in Halifax, and in 1842 she and Charlotte went to Brussels for more school, with Emily soon returning home. Emily spent much of her life at home in Haworth and had few friends. Because of her rather withdrawn and reclusive life, not much is known about her. She did enjoy walking on the moors, and she took care of an older servant and her brother Branwell who died in 1848 because of his excessive drinking. Emily, Anne and Charlotte began writing mythology when they were children, stemming from the stories they made up about imaginary worlds such as Gondal and Angria. In 1846 the three sisters financed and published a book of Poems under the pseudonyms Ellis, Acton and Currer Bell. Although only two copies sold, the good reviews encouraged them to continue their writing, and soon plays, serial stories and other writings emerged. Wuthering Heights, Emily’s only novel, was published in December of 1847 under the pseudonym Ellis Bell.  The book did not gain immediate success, but is now thought one of the finest novels in the English language. A year after Wuthering Heights was published, on December 19th, 1848, Emily Brontë died of tuberculosis.

Many people, generally those who have never read the book, consider Wuthering Heights to be a straightforward, if intense, love story  ( A Romeo and Juliet on the Yorkshire Moors). But this is a mistake. Really the story is one of revenge. It follows the life of Heathcliff, a mysterious gypsy-like person, from childhood (about seven years old) to his death in his late thirties. Heathcliff rises in his adopted family and then is reduced to the status of a servant, running away when the young woman he loves decides to marry another. He returns later, rich and educated, and sets about gaining his revenge on the two families that he believed ruined his life. The most famous love story in an English novel is set in the wilderness of the Yorkshire Moors. The story of unfortunate lovers Heathcliff and Cathy who, despite a deep affection for one another, are forced by circumstance and prejudice to live their apart. Heathcliff and Cathy first meet as children when her father brings the abandoned boy to live with them. When the old man dies several years later Cathy's brother, now the master of the estate, turns Heathcliff out forcing him to live with the servants and working as a stable boy. The barrier of class comes between them and she eventually marries a rich neighbour, Mr. Edgar Linton, at which point Heathcliff disappears. He returns several years later, now a rich man but little can be done.