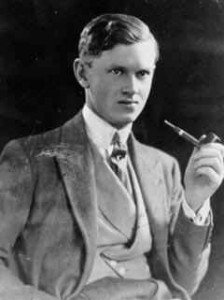 Evelyn Waugh was born on October 28th in Hampstead (London) in 1903. Waugh was the second son of Arthur Waugh, a prominent man of letters, and younger brother to Alec Waugh, the novelist. Waugh was close to his mother but felt somewhat shut out by the bond between his father and older brother. Due to a homosexual scandal involving his brother at the Sherborne School, Waugh was forced to attend Lancing, a strongly religious institution. He resented the displacement but continued to distinguish himself as a writer and an artist. He earned a scholarship to Hertford College in Oxford. Waugh loved his life at Oxford, quickly adapting and adopting the trappings of student life: pipe, bike and a wry attitude. He left before earning his degree, however, and took a series of low-paying teaching jobs while trying to be an artist. After university he taught for a brief period in private schools and was dismissed from one of them for drunkenness. He worked for the Daily Express. Waugh's service during World War II in the Royal Marines and Royal Horse Guards and his involvement in a British military mission to the Yugoslav Partisans (1944) provided rich material for his later novels. The failure of Waugh's short first marriage (to Evelyn Gardner, from 1928-30) led to his conversion to Roman Catholicism. In the early 1930s, Waugh had unrequited romantic interest in socialite Teresa Jungman, a fact revealed via letters discovered decades later. In 1937, Waugh married Laura Herbert, a cousin of his first wife, and they had seven children. But in less than 10 years he was considered old for his age, suffering physical ailments presumably due to excessive alcohol, tobacco and sedative use to control his depression and insomnia. Having become embittered, his writing fell out of vogue, and he was forced to submit to interviews and write material that he found distasteful.Evelyn Waugh died of heart failure on April 10th, 1966, which happened to be Easter Day—at his home in Combe Florey, Somerset, England.

It is a complex story about an old Catholic family and for many critics it is Waugh's best non-satirical novel. The author's preface to the revised edition of 1960 states that the novel is 'an attempt to trace the workings of the divine purpose in a pagan world'. But some critics, dismayed by the way the finely balanced prose in this novel sometimes degenerates into rhetoric, see it as an account of emotional surrender by a man who finds reality too harsh to deal with. Whatever the author's claims for the divine purpose the hero, Ryder, is indeed an innocent when he enters the world of the great Catholic family, and his behaviour is conditioned by his response to them. His acquaintance with them begins at Oxford, when Sebastian Flyte, the younger son of the Marquis of Marchmain of Brideshead Castle, becomes his friend. He is a frequent visitor to Brideshead, where Sebastian's mother is a fervent Catholic. Sebastian's father has departed to settle abroad with his mistress. Sebastian becomes an alcoholic as the story progresses, ending his life as a humble servant in a North African monastery. Ryder continues to visit Brideshead, where his feelings are centred on Sebastian's sister, Julia. But she marries a non-Catholic, a vulgar politician who fails to qualify as a Catholic convert. The marchioness dies and the marquis returns home, and on his deathbed is restored to the faith. Julia, who might have married Ryder after her divorce from the politician, witnesses her father's reconciliation and she too returns to the faith. Ryder's doubts about his own faith are resolved by Julia's renunciation of him. The outline of the story cannot, of course, take account of the fine things

Tony Last is a mild-mannered feudal landowner sentimentally tied to his hideous Gothic home. Brenda Last is his bored young wife, restlessly swept into the modern metropolitan culture of telephone calls, small service flats and Economics evening classes. And both live in a world where nobody accepts responsibility and nobody takes the blame, because it's a world beyond an individual's control.