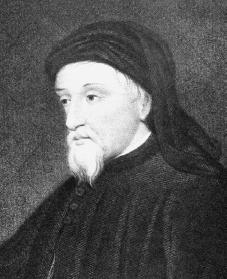 Geoffrey Chaucer was born probably in London around the year 1343 AD into a world that was going through much political and social change. This dynamic is reflected throughout his work and his life events. His father was a prosperous wine merchant. We do not know any details of his early life and education. He was born into a middle-class family of a wealthy wine merchant so he had much opportunity to study Latin as well as English. Chaucer fought for King Edward III, and was captured and then ransomed later. Around 1366, Chaucer married Philippa Roet, a lady-in-waiting in the queen's household. They are thought to have had three or four children. Philippa's sister, Katherine Swynford, later became the third wife of John of Gaunt, the king's fourth son and Chaucer's patron. He pursued a public life, eventually holding jobs as Italian diplomat, Customs official, and a Justice of the Peace. In 1386, he was elected member of parliament for Kent, and he also served as a justice of the peace. In 1389, he was made clerk of the king's works, overseeing royal building projects. He held a number of other royal posts, serving both Edward III and his successor Richard II. Chaucer's varied experiences gave him a broad opportunity to find much to write about, and he wrote through his entire lifetime, even when he held prestigious positions. In fact, Chaucer was unable to finish the Canterbury tales as he intended, but he worked on the tales exclusively after his wife died in 1386 until his death in 1400. He disappeared from the historical record in 1400, and is thought to have died soon after. He was buried in Westminster Abbey.

Several pilgrims of various social and ethical standing are on their way to Canterbury to visit the cathedral there. They stay a night in an Inn, and the next day, the Innkeeper offers to join the group on the trip, and judge stories that they will tell to pass the time. The person with the best story wins a free dinner paid by the other pilgrims. The knight tells the first story.