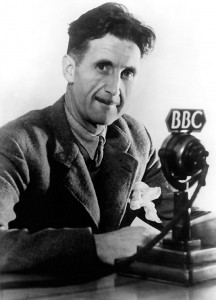 George Orwell (a pen name) was born Eric Hugh Blair on 25th June 1903 in Motihari, Bengal, an area in eastern India only about three hundred miles from Burma, where Orwell was to serve twenty years later as a British civil servant. Orwell had a sister about five years older than him, and another one five years younger, but he was never very close to them. In 1911, at a very early age, Orwell was sent back to England to begin his education. Orwell graduated from Eton at age eighteen, and rather unexpectedly, was to spend the next five years (1922-27) in Burma as an officer of the Indian Imperial Police. He resigned in 1927 and decided to become a writer. In 1928, he moved to Paris where lack of success as a writer forced him into a series of menial jobs. He described his experiences in his first book, 'Down and Out in Paris and London', published in 1933. He took the name George Orwell, shortly before its publication.  An anarchist in the late 1920s, by the 1930s he had begun to consider himself a socialist. In 1936, he was commissioned to write an account of poverty among unemployed miners in northern England, which resulted in 'The Road to Wigan Pier' (1937). Late in 1936, Orwell travelled to Spain to fight for the Republicans against Franco's Nationalists. He was forced to flee in fear of his life from Soviet-backed communists who were suppressing revolutionary socialist dissenters. The experience turned him into a lifelong anti-Stalinist. Between 1941 and 1943, Orwell worked on propaganda for the BBC. In 1943, he became literary editor of the Tribune, a weekly left-wing magazine. By now he was a prolific journalist, writing articles, reviews and books. In the year, 1945, Orwell's wife died as the result of a minor operation. He attributed her death to lowered physical resistance due to the war; both she and Orwell had consistently given up a part of their wartime food rations to feed children, and consequently had impaired their health. In 1949, he married Sonia Brownell, who assisted him in taking care of his adopted son. On January 21st, 1950, as he was about to leave for a sanitarium in Switzerland, he had a tubercular haemorrhage and died.

It is a political fable set in a farmyard but based on Stalin's betrayal of the Russian Revolution. It is a satire in fable form on Revolutionary and Post-Revolutionary Russia, and by extension, on all revolutions. The animals of the Manor Farm live in a bad situation because their farmer Mr. Jones, a mean and always drunk man, exploits them. One day Old Major, an old pig, called a meeting of all the animals and told them about a dream that he had had the previous night. He had dreamed about an old song 'Beasts of England' that started a resistance against the human beings. Everyone was very excited. But Old Major died a few days later and two young pigs, Snowball and Napoleon, started leading the preparations for the Rebellion. About three months later they revolted against Mr. Jones and they took over the farm. The purpose of the revolution was to create a fair society made only by animals and based on seven commandments like “Four legs good, two legs bad” and most important one: "All animals are equal". They also changed the name of the farm to "Animal Farm". Snowball, an inventive and vivacious pig and Napoleon, a big and cruel-looking pig, started to fight for leadership. In the meantime Mr. Jones wanted to get the farm back but the animals succeeded in the battle and Mr. Jones was forced to run away. One day, when Snowball announced his plans to build a windmill, Napoleon arrived in the farm with nine big and cruel dogs that made Snowball run away bleeding. From that day Napoleon was the real dictator of the farm; if an animal didn't agree with him, he was eaten up by his dogs. If something went wrong (like when the windmill they'd worked so hard on was wrecked), Napoleon blamed it on Snowball, who, according to him, was sneaking around Animal Farm ruining everything. When Boxer, the strongest horse in the farm, lost his strength because of old age and fell while he was building a windmill, Napoleon sent him to be slaughtered. Now Napoleon had pity on nobody. He and the pigs were like Mr. Jones - they exploited the other animals, they took advantage of the foolishness of some animals and they came into contact with human beings for business although they had said it was forbidden. In the end they became like human beings, they started to walk on their hind legs and they changed the old maxim with a new one: “Four legs good, two legs better”. Nothing was changed and their resistance seemed to be useless.  Hence the famous quote: "All animals are created equal but some are more equal than others".

It is a nightmare story of totalitarism of the future and one man's hopeless struggle against it and final defeat by acceptance. Winston Smith wrestles with oppression in Oceania, a place where the Party scrutinizes human actions with ever-watchful Big Brother. Defying a ban on individuality, Winston dares to express his thoughts in a diary and pursues a relationship with Julia. These criminal deeds bring Winston into the eye of the opposition, who then must reform the nonconformist. Winston Smith, the hero, has no heroic qualities, only a wistful longing for truth and decency. But in a social system where there is no privacy to have unorthodox ideas incurs the death penalty, he knows that there is no hope for him. It is set in an imaginary totalitarian future, the book made a deep impression, with its title and many phrases - such as 'Big Brother is watching you', 'newspeak' and 'doublethink' - entering popular use.