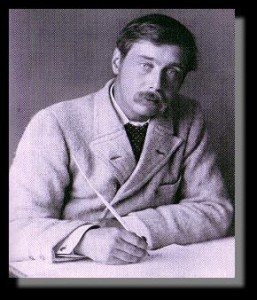 He was born Herbert George Wells on September 21st, 1866, in Bromley in Kent, England. He was born into a poor family of shopkeepers.  His father played professional cricket and ran a hardware store for a time. Wells's parents were often worried about his poor health.  They were afraid that he might die young, as his older sister had.  At the age of 7, Wells had an accident that left him in bed for several months. During this time, he went through many books, including some by Washington Irving and Charles Dickens.  After Wells's father's shop failed, his family, which included two older brothers, struggled financially.  The boys were apprenticed to a draper, and his mother went to work on an estate as a housekeeper.  He hated the job of draper and eventually quit, much to his mother's dismay.  He decided to turn to teaching and soon found a way to continue his own studies.  He won a scholarship to the Normal School of Science where he learned about physics, chemistry, astronomy and biology, among other subjects. He left his teaching position when he was in his early thirties to write The Time Machine, which was published in 1895.  It became an overnight literary sensation. The huge success of this novel led him to follow his dreams of authorship as he continued to write science fiction novels with The Invisible Man, War of the Worlds, and The Island of Dr. Moreau.  In 1891, Wells married his cousin, Isabel Mary Wells, but the union didn't last. Wells soon took up with Amy Catherine "Jane" Robbins and the pair married in 1895 after he officially divorced Isabel. He and Jane had two children together, sons George Philip and Frank. He was a free thinker about sex and sexuality. So Wells did not let marriage stop him from having other relationships. He had numerous affairs and later lived apart from Jane. His involvement with Amber Reeves resulted in the birth of their daughter Anna-Jane in 1909. Wells later developed feelings for the feminist writer Rebecca West, and they had a son, Anthony, together. Jane died of cancer in 1927.Wells remained productive until the very end of his life, but his attitude seemed to darken in his final days.   As he got older, Wells began predicting the end of society and died at the age of 80 on August 13th, 1946, in London, soon after the detonation of the first atomic bomb.

A science fiction romance about a scientist who fatally stumbles upon the secret of invisibility. In this tale of psychological terror, a young scientist must live in the personal hell created by his own experiments. Using himself as the subject, the scientist discovers the key to invisibility; yet, he is unable to reverse the results. Wells had created a gripping masterpiece on the destructive effects the invisibility has on the scientist and the insane and murderous chaos left in his malicious wake.A mysterious man, Griffin, arrives at the local inn of the English village of Iping, West Sussex, during a snowstorm. The stranger wears a long-sleeved, thick coat and gloves; his face is hidden entirely by bandages except for a fake pink nose; and he wears a wide-brimmed hat. He is excessively reclusive, irascible, and unfriendly. He demands to be left alone and spends most of his time in his rooms working with a set of chemicals and laboratory apparatus, only venturing out at night. While Griffin is staying at the inn, hundreds of strange glass bottles (that he calls his luggage) arrive. Many local townspeople believe this to be very strange. He becomes the talk of the village. Meanwhile, a mysterious burglary occurs in the village. Griffin has run out of money and is trying to find a way to pay for his board and lodging. When his landlady demands that he pay his bill and quit the premises, he reveals part of his invisibility to her in a fit of pique. An attempt to apprehend the stranger is frustrated when he undresses to take advantage of his invisibility, fights off his would-be captors, and flees to the downs. There Griffin coerces a tramp, Thomas Marvel, into becoming his assistant. With Marvel, he returns to the village to recover three notebooks that contain records of his experiments. When Marvel attempts to betray the Invisible Man to the police, Griffin chases him to the seaside town of Port Burdock, threatening to kill him. Marvel escapes to a local inn and is saved by the people at the inn, but Griffin escapes. Marvel later goes to the police and tells them of this "invisible man," then requests to be locked up in a high-security jail. Griffin's furious attempt to avenge his betrayal leads to his being shot. He takes shelter in a nearby house that turns out to belong to Dr. Kemp, a former acquaintance from medical school. To Kemp, he reveals his true identity: the Invisible Man is Griffin, a former medical student who left medicine to devote himself to optics. Griffin recounts how he invented chemicals capable of rendering bodies invisible, and, on impulse, performed the procedure on himself. Griffin tells Kemp of the story of how he became invisible. He explains how he tried the invisibility on a cat, then himself. Griffin burned down the boarding house he was staying in, along with all the equipment he used to turn invisible, to cover his tracks; but he soon realised that he was ill-equipped to survive in the open. He attempted to steal food and clothes from a large department store, and eventually stole some clothing from a theatrical supply shop and headed to Iping to attempt to reverse the invisibility. But now he imagines that he can make Kemp his secret confederate, describing his plan to begin a "Reign of Terror" by using his invisibility to terrorise the nation. Kemp has already denounced Griffin to the local authorities and is waiting for help to arrive as he listens to this wild proposal. When the authorities arrive at Kemp's house, Griffin fights his way out and the next day leaves a note announcing that Kemp himself will be the first man to be killed in the "Reign of Terror". Kemp, a cool-headed character, tries to organise a plan to use himself as bait to trap the Invisible Man, but a note that he sends is stolen from his servant by Griffin. Griffin shoots and injures a local policeman who comes to Kemp's aid with the use of Kemp's gun. then breaks into Kemp's house. Kemp bolts for the town, where the local citizenry come to his aid. Griffin is seized, assaulted, and killed by a mob. The Invisible Man's naked, battered body gradually becomes visible as he dies. A local policeman shouts to have someone cover Griffin's face with a sheet, then the book concludes. In the final chapter, it is revealed that Marvel has secretly kept Griffin's notes, but that he is completely incapable of understanding them.

It is a social allegory set in the year 802701, describing a society divided into two classes, the subterranean workers, called Morlocks, and the decadent Eloi. A dreamer obsessed with traveling through time builds himself a time machine and, much to his surprise, travels over 800,000 years into the future. The world has been transformed with a society living in apparent harmony and bliss, but as the Traveler stays in this world of the future he discovers a hidden barbaric and depraved subterranean class. Wells’s translucent commentary on the capitalist society was an instant bestseller and launched the time-travel genre.The book's protagonist is an English scientist and gentleman inventor living in Richmond, Surrey in Victorian England, and identified by a narrator simply as the Time Traveller. The narrator recounts the Traveller's lecture to his weekly dinner guests that time is simply a fourth dimension, and his demonstration of a tabletop model machine for travelling through it. He reveals that he has built a machine capable of carrying a person through time, and returns at dinner the following week to recount a remarkable tale, becoming the new narrator. In the new narrative, the Time Traveller tests his device with a journey that takes him to A.D. 802,701, where he meets the Eloi, a society of small, elegant, childlike adults. They live in small communities within large and futuristic yet slowly deteriorating buildings, doing no work and having a frugivorous diet. His efforts to communicate with them are hampered by their lack of curiosity or discipline, and he speculates that they are a peaceful, common society, the result of humanity conquering nature with technology, and subsequently evolving to adapt to an environment in which strength and intellect are no longer advantageous to survival. Returning to the site where he arrived, the Time Traveller is shocked to find his time machine missing, and eventually concludes that it has been dragged by some unknown party into a nearby structure with heavy doors, locked from the inside, which resembles a Sphinx. Luckily, he had removed the machine's levers before leaving it. Later in the dark, he is approached menacingly by the Morlocks, ape-like troglodytes who live in darkness underground and surface only at night. Within their dwellings he discovers the machinery and industry that makes the above-ground paradise possible. He alters his theory, speculating that the human race has evolved into two species: the leisured classes have become the ineffectual Eloi, and the downtrodden working classes have become the brutish light-fearing Morlocks. Deducing that the Morlocks have taken his time machine, he explores the Morlock tunnels, learning that due to a lack of any other means of sustenance, they feed on the Eloi. His revised analysis is that their relationship is not one of lords and servants, but of livestock and ranchers. The Time Traveller theorizes that intelligence is the result of and response to danger; with no real challenges facing the Eloi, they have lost the spirit, intelligence, and physical fitness of humanity at its peak. Meanwhile, he saves an Eloi named Weena from drowning as none of the other Eloi take any notice of her plight, and they develop an innocently affectionate relationship over the course of several days. He takes Weena with him on an expedition to a distant structure that turns out to be the remains of a museum, where he finds a fresh supply of matches and fashions a crude weapon against Morlocks, whom he must fight to get back his machine. He plans to take Weena back to his own time. Because the long and tiring journey back to Weena's home is too much for them, they stop in the forest, and they are then overcome by Morlocks in the night, and Weena faints. The Traveller escapes when a small fire he had left behind them to distract the Morlocks catches up to them as a forest fire; Weena and the pursuing Morlocks are lost in the fire. The Morlocks open the Sphinx and use the time machine as bait to capture the Traveller, not understanding that he will use it to escape. He reattaches the levers before he travels further ahead to roughly 30 million years from his own time. There he sees some of the last living things on a dying Earth: menacing reddish crab-like creatures slowly wandering the blood-red beaches chasing enormous, huge butterflies in a world covered in simple lichenous vegetation. He continues to make short jumps through time, seeing Earth's rotation gradually cease and the sun grow larger, redder, and dimmer, and the world falling silent and freezing as the last degenerate living things die out. Overwhelmed, he goes back to the machine and returns to Victorian time, arriving at his laboratory just three hours after he originally left. Interrupting dinner, he relates his adventures to his disbelieving visitors, producing as evidence two strange white flowers Weena had put in his pocket. The original narrator then takes over and relates that he returned to the Time Traveller's house the next day, finding him preparing for another journey.