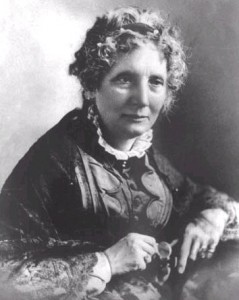 Harriet Beecher Stowe was born on June 14th 1811 in Litchfield, Connecticut. She was the seventh of thirteen children.  Her father was a congregational minister named Lyman Beecher and Harriet’s mother was Roxana Foote Beecher.  Roxana died when Harriet was five years old, and because of this loss, Harriet sympathized with slaves who lost their families. Harriet enrolled in the seminary (girls' school) run by her older sister Catharine, where she received a traditional academic education usually reserved for males at the time with a focus in the classics, including study of languages and mathematics. Harriet lived a very religious life since she was the daughter, wife, sister, and mother of preachers.  In 1832, the Stowe family moved to Cincinnati Ohio and Harriet spent 18 years there.  In 1836, she married Calvin Stowe.  It was in the literary club that she met Calvin Ellis Stowe, a widower who was a professor at the seminary. The two married on January 6th, 1836. He was an ardent critic of slavery, and the Stowes supported the Underground Railroad, temporarily housing several fugitive slaves in their home. Most slaves continued north to secure freedom in Canada.  The Stowes had seven children together, including twin daughters.  Living across the river from Kentucky gave her a view of slavery at close range. During the 1840’s, Harriet taught at a school for ex-slave children that the Beecher family ran.  In 1850, her husband accepted a position as a professor at Bowdoin College in Maine and the family moved to New England where she began writing her novel.  The book sold more copies than any other book in history to date besides the Bible.  In 1856, she wrote a second antislavery novel called “Dred, A Tale of the Great Dismal Swamp.” Afterwards, she wrote several lesser known novels about New England.  Modern researchers now speculate that at the end of her life Harriet was suffering from Alzheimer's disease.  Harriet Beecher Stowe died on July 1st, 1896, at age eighty-five in Hartford, Connecticut.  She is buried in the historic cemetery at Phillips Academy in Andover, Massachusetts.

Uncle Tom's Cabin, described by Stowe herself as a "series of sketches" depicting the human cruelty of slavery, opens with a description of Arthur Shelby's Kentucky plantation during the antebellum period.  Although Shelby is not characterized as a cruel master, he has nevertheless incurred serious debts - prompting him sell some slaves to avoid financial ruin. Mr. Haley, the slave trader, purchases Uncle Tom, Shelby's loyal servant since childhood, and five-year-old Harry, a beautiful and talented child who sings, dances and mimes.Shelby regrets taking the child away from his mother, Eliza, as much as he regrets betraying Uncle Tom's faithfulness. Eliza overhears Mrs. Shelby, a very religious woman, protesting her husband's decision, and decides to flee the plantation with her son. George, her husband from a neighbouring plantation, has already left for Canada via the "underground railroad," a secret network of people who usher runaway slaves to freedom in the North. Eliza plans to do the same, and tries to convince Uncle Tom to save himself and come with her. Uncle Tom, however, must remain loyal to his master, despite his betrayal and the risk of death at the cruel hands of a new master, and does not accompany Eliza on her journey to the Ohio River. Haley searches for Eliza in vain, for she is spurred on by fear of losing her child and reaches the river quickly. Amazingly, Eliza crosses the river by jumping from one ice flow to the next. Upon reaching the shore in Ohio, Mr. Symmes, a man who has observed her brave feat, listens to her story. Fortunately, Symmes hates slave traders and thus takes Eliza and Harry to the house of Senator Bird, where they receive food and lodging. Ironically, Bird has just voted for a bill prohibiting aid to fugitive slaves, but the Senator is very moved by Eliza's story. He thus changes his convictions and takes the runaways to a Quaker settlement, where they stay with the Halliday family. Coincidentally, Eliza's husband George has sought refuge in this very community, and the young family is reunited. The Quakers help the family board a ship for Canada before Haley's hired slave hunters, Loker and Marks, can capture them. After the hunt for Eliza and Harry fails, Haley returns to Shelby's to collect the other half of his purchase, Uncle Tom. The slaves at the plantation are very mournful, but Tom remains placid and tries to read his Bible for comfort. On the steamboat to New Orleans, where Tom is to be sold, Tom befriends an angelic little girl, "Little Eva" St. Clare.Uncle Tom saves the five-year-old beauty from drowning, and she convinces her father to buy Tom for her own family. Tom finds life on the St. Clare plantation agreeable, for although he is head coachman he spends most of his time with Little Eva. The love and goodness of which she constantly speaks influences those around her, convincing people of their inner value and that of the people around them. Eva even manages to convince the impish slave girl Topsy that she deserves to be loved, and touches the heart of her stern aunt, Miss Ophelia, who has travelled from Vermont to manage the plantation because Mrs. St. Clare is a hypochondriac. Tom's contentment does not last, however, because Eva soon falls ill. Dying, she asks that all the slaves surround her bedside, where she gives each of them a golden lock of hair and tells them they must Christian so that they can see each other in heaven. Eva implores Mr. St. Clare to free Tom after her death. Mr. St. Clare is so distraught by her death, however, that he never legally frees Tom before he himself is killed trying to mediate a barroom scuffle. Mrs. St. Clare sells the slaves to settle her husband's debts, and the deplorable Simon Legree purchases Tom. Legree is a drunkard who beats his slaves brutally. Only one of his slaves, Cassy, defies her master by threatening to do voodoo on him. Cassy tries to help Uncle Tom, but he is a pacifist and will not resist the terrible beatings Legree inflicts upon him. Mr. Shelby, in the meantime, has been tracking Tom down, and arrives at the Legree plantation one day. By this time, however, Tom is very near death. Once Tom is dead and buried, Shelby takes a steamboat to Kentucky, where he meets Cassy and another slave from Legree's, Emmeline, who are fleeing the plantation. The three then meet Emily de Thoux, who is George Harris's sister, and discover that Cassy is the mother of Eliza. Once in Kentucky, Shelby frees his slaves. Cassy, Emmeline, and Emily travel to Canada where they are reunited with Eliza and George. The Harris family and Cassy eventually travel to Liberia to found a freedom colony for ex-slaves. The novel ends with a chapter summarizing the lesson learned from these "sketches" of experiences with slavery: that slavery is indeed a very cruel and evil institution that should be abolished.