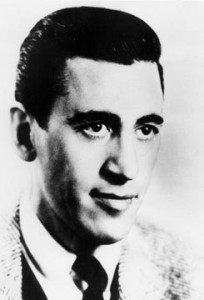 J.D. Salinger's father was a Jewish importer of hams, but his mother was a Catholic. Both families disapproved of the marriage, and J.D.'s father seems to have generally disapproved of his son. The feeling was mutual; J.D. skipped his father's funeral and later stopped eating meat. After being booted from at least one private high school, young J.D. or "Sonny", as his father called him was sent to Valley Forge Military Academy in Pennsylvania, which was later the inspiration for Pencey Prep in Salinger's Catcher in the Rye. After high school, Salinger was drafted into the Army, and fought in the bloody Battle of Normandy. The Catcher in the Rye, Salinger's first and only known novel, took him ten years to write, and became an instant hit when the Book-of-the-Month Club chose it as their main selection in 1951. It has never gone out of print, and as the novel's popularity grew its author became more and more reclusive. He reportedly still writes, but only for himself, not for publication. The novel was included on a 2005 Time Magazine list of the 100 best English-language novels written since 1923, and it was named by Modern Library and its readers as one of the 100 best English-language novels of the 20th century. Salinger died of natural causes on January 27th, 2010, at his home in Cornish, New Hampshire.

Holden Caulfield is the protagonist and narrator of the story. Holden is seventeen when he tells the story, but was sixteen years old when the events took place. His narration begins with his expulsion (for academic failure) from a school called Pencey Prep. He is intelligent and sensitive, but Holden narrates in a cynical and jaded voice. Holden's tale begins at Pencey, which he despises for its prevailing "phoniness." Holden finds a lot of people and attitudes unbearably phony. It's the day of the big Pencey football game, something that Holden has little interest in. In lieu of watching, Holden takes a walk to the house of his history teacher, old Mr. Spencer. This isn't a particularly satisfying visit, nor is his last evening at Pencey, during which he hangs around with a coarse and dull guy named Ackley and later gets beat up by his own roommate, a ladies' man named Stradlater. The idea of Stradlater taking one ofHolden's old friends, Jane Gallagher, out on a date, and the thought of suave Stradlater making the moves on his innocent friend drives Holden to his fists. After the fight, Holden decides to get up and leave Pencey immediately. He finishes packing and leaves campus in the middle of the night. A train takes Holden to New York City, where his family has lived all his life. Here, he checks into the derelict Edmont Hotel, a place that provides him with several adventures including an evening dancing with three dull tourist girls and a clumsy encounter with a prostitute. Holden sends the prostitute away without services rendered, and although he pays her for her time, it's apparently not enough. For this, Holden gets his second pummeling in as many nights, at the hands of Maurice, the hotel's elevator man/pimp. Holden spends a total of two days in the city, and these days are largely characterized by drunkenness and loneliness. He meets up with an old acquaintance named Carl Luce and has a date with an off-and-on girlfriend, Sally Hayes, but both experiences leave him more miserable than before. Finally, Holden sneaks into his parents' apartment to visit his little sister Phoebe, who's about the only person he seems to be able to communicate with. After this, Holden feels a little better, and he heads off to the apartment of his ex-English teacher, Mr. Antolini. The comfort Holden hopes to find there is upset when he wakes up in the middle of the night to find Mr. Antolini petting his head in a way that seems "perverty." After this, Holden gets awfully depressed. His distress with the phoniness and stupidity of the world focuses as he spends his last afternoon wandering around the city. What bothers him most is that the world seems to have no sanctuary from the phony or perverse in it anymore. Holden begins to envision himself as a guardian of children, someone who will protect their innocence. This hope is crystallized in a vision of himself as the catcher in the rye - a sort of guard at the edges of a field where children can run free and play, a guardian who can keep these kids from falling, in their exuberance, over the field's edges. Though Holden tells his little sister he's going to move out West, this doesn't pan out. Instead, after a little fight with Phoebe, Holden ends up accompanying her to the park and watching as she rides the merry-go-round, stretching from her wooden horse to reach a prized brass ring. As he watches with a combination of fear and joy, Holden seems to have decided that there can be no catcher, that all you can do is hope kids develop in the harsh world on their own. Holden never does give a thorough assessment of his prognosis since his hospitalization. But his time recovering has left him calmer and with more perspective, but still lonely and without direction.