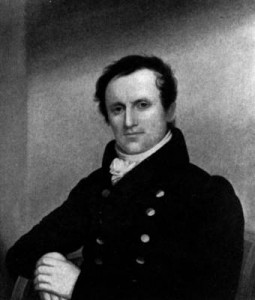 James Fenimore Cooper was born on September 15th, 1789 in Burlington, New Jersey, the eleventh of twelve children. When he was one year old, he moved with his parents William and Elizabeth to Cooperstown on Ostego Lake in central New York. During Cooper's boyhood, there were few backwoods settlers left and even fewer Indians. James Fenimore Cooper had a remarkably boring, wealthy existence. His parents were shrewd and ambitious, easily acquiring money and power. Thus he was exposed early on to the finer pleasures of life. James was sent to the local Academy for a few years before being transferred to the care of an Episcopal clergyman in Albany. The Reverent Thomas Ellison's small school offered all of the advantages to which the son of a wealthy Federalist was entitled: connections to powerful people and instruction in the grand, prejudiced style of the old country. In 1803, Cooper entered Yale College. His charm never ceased for those who loved him. He was expelled from Yale in his junior year for traditional undergraduate misconduct. In October 1806 Judge Cooper sent James to sea as a common sailor. Cooper enjoyed his year on the Sterling. The passage to England was long. The author mostly drifted around London alone or with his shipmates. After his return to America, Cooper was commissioned a midshipman. His three years in the Navy, were spent peacefully. In 1809 his father was leaving a political meeting in Albany and was killed when an opponent of his struck him on the head. The worldly position of James was much improved. He inherited $50,000 immediately and still had a remainder interest with his brothers in the $700,000 estate. Less than half a year later he was engaged to marry Susan Augusta De Lancey, a woman from a fine, wealthy family. The marriage took place in 1811, and Cooper resigned from the Navy. The couple built a home near Scarsdale around 1817. The Coopers had a thoroughly happy, old-fashioned marriage in which the husband ran the show but the wife still got her way. Five daughters and two sons were born to them, and one of each gender would die in infancy. Between 1813 and 1819 Cooper's five brothers all died. Cooper had to support their widows and children. Around the last of these deaths he began to write. One evening when his wife was unwell, he was reading aloud the latest English novel of family life. He threw the book down in disgust, saying he could write a better story himself. Susan challenged him to do so. James set to work immediately. His first novel, Precaution, was finished in 1820. It is a moral tale that imitated the style of Jane Austen. Most heartily agree that it was a terrible book, but luckily Cooper improved with age. In the next two decades he would go on to write the famous Leather stocking Tales, one of which was The Last of the Mohicans, published in 1826. Cooper wrote many political articles for local papers. The money he had as a young man was not wasted, so he and his family remained well-off for his entire life. Cooper died on September 14th, 1851. Cooper was more successful and respected abroad than at home. His work was very influential to European writers like Honore de Balzac and Leo Tolstoy.

The Last Of The Mohicans : (Le Dernier des Mohicans) 1826

It deals with adventures of the frontier and give a vivid picture of American Indian and pioneer life. We can find the very spirit of the wilderness, but also the poetry of solitude and danger. The story is set in the British province of New York during the Seven Years War. It features a Huron massacre (with French acquiescence) of between 2,000 to 2,500 Anglo-American and British troops, who had honorably surrendered at Fort William-Henry, plus some women and servants. The Huron kidnapped two sisters, daughters of the British commander, and others. The last two Mohican warriors rescue the kidnapped women. Parts of the story may have been inspired by the capture and death of Jane McCrea in July 1777 near Fort Edward, New York, by members of an Algonquian tribe. The character Chingachgook speaks a line that holds the title, saying, "When Uncas follows in my footsteps, there will no longer be any of the blood of the sagamores, for my boy is the last of the Mohicans." The title is also referred to near the end of the book, when Tamenund says, "I have lived to see the last warrior of the wise race of the Mohicans."