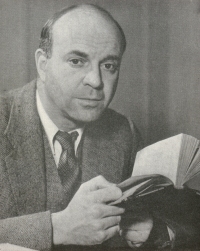 John Dos Passos was born John Roderigo Madison in Chicago on January 14th, 1896, the illegitimate son of Lucy Addison Sprigg Madison, from Petersburg, Virginia, and John Randolph Dos Passos, a corporation lawyer in New York. In his infancy, John traveled with his mother throughout Europe.  As a result, French was his first spoken language. He returned to the United States at the age of five, still living with his mother, whose health had begun to deteriorate due to a stroke two years before. The following year, they went back to Europe, where his mother felt more comfortable. At this point, John came down with rheumatic fever, an illness with which he would have to cope again and again throughout his life. He attended school in England, then travelled back to America to enroll in Choate. A good student, though alienated from his peers by his foreign accent and mediocre athleticism, John edited the school newspaper, graduated a year early, and entered Harvard in 1912, after a year of travels in France, Italy, Greece, Turkey, and Egypt. There he developed an interest in modern art, ballet, opera, and a voracious appetite for great literature. In 1915, John's mother died. By now having adopted the name John Roderigo Dos Passos, Jr., after his father, he was nonetheless crushed, and almost refused to complete Harvard. Shortly before graduating cum laude, he began writing. War fever was now mounting, and following his father's sudden death, Dos Passos joined the effort in Europe, serving in an ambulance unit in France and Italy. In 1920, he published his first novel, One Man's Initiation, based on wartime experiences. A second war-related work followed: Three Soldiers, published in 1921 and a resounding success. After travelling to Istanbul and the Sea of Marmara, where he was struck by the horrors of the Turkish-Greek War, and writing a collection of poetry, Dos Passos began work on Manhattan Transfer. Before it was published, in 1925, he suffered another bout of rheumatic fever. More travels followed, in Morocco, Mexico, and Europe. His politics, meanwhile, grew more impassioned. He joined Upton Sinclair, Floyd Bell, Dorothy Parker and others in a campaign to stop the execution of Sacco and Vanzetti. He was arrested and jailed after a protest march in August of 1927, days before the two men were electrocuted. He wrote articles for the left-wing journal The New Masses, and published his monumental U.S.A. trilogy in the 1930's: The 42nd Parallel in 1930, 1919 in 1932, and The Big Money in 1936. The 1930's also witnessed, however, the beginnings of Dos Passos's disillusionment with leftist politics. Dos Passos discussed Communist duplicity and brutality with George Orwell before returning to America and publishing the article "Farewell to Europe!" in Common Sense. In 1938 his wife Katy Smith was killed in a car accident, a crash which also cost him his right eye.  He died on September 28th 1970 of congestive heart failure.  His final novel, Century's Ebb, was published in 1975.

This book is considered by many to be John Dos Passos's greatest work. It is an expressionistic picture of New York in the 1920s. From Fourteenth Street to the Bowery, Delmonico's to the underbelly of the city waterfront, Dos Passos chronicles the lives of characters struggling to become a part of modernity before they are destroyed by it.It is a collective portrait in hundreds of fictional episodes of life in New York City. Accounts of a succession of unrelated characters, this novel presents a composite picture of the meaninglessness and decadence of the life of the typical New Yorker of the early 1920s. Manhattan Transfer is a story that unfolds against the backdrop of towering skyscrapers and filthy tenements, over meals at the Waldorf and nights in boxcars. In this passionate novel, Dos Passos reveals the lives of wealthy power brokers and struggling immigrants alike, and documents their struggles to become a part of modernity before they are destroyed by it. Manhattan Transfer presents the good, the bad and the ugly side of life in New York. Money seems to be the driving force behind everybody's lives and love is hard to come by. However, even the failure to realise one's goals does not deter one from hanging on in New York, as Bud does. It is, after all, the 'centre of things.' It is in the end Jimmy, who emerges as the man who dares to rebel against the 'getting and spending' life that the city promises.