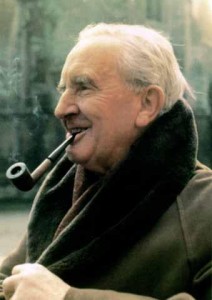 John Ronald Reuel Tolkien (pron.: Tol-keen; equal stress on both syllables) was born on 3rd January 1892 in the South African town of Bloemfontein, in an area known as the Orange Free State. His father, Arthur Tolkien, had left England in order to take up a senior position with a bank in the colony. When J.R.R. Tolkien was almost three years old, he returned to England with his mother and his younger brother. After Arthur's death from rheumatic fever, the family made their home at Sarehole, near Birmingham. This beautiful rural area made a great impression on the young Ronald, and its effect can be seen in his later writings and his pictures. Tolkien's family lived in genteel poverty, eventually moving to Moseley a suburb of Birmingham, just north west of Sarehole. When he was 12, Tolkien's mother died, and he and his brother were made wards of a Catholic priest.  They lived with aunts and in boarding homes thereafter. The dichotomy between Tolkien's happier days in the rural landscape of Sarehole and his adolescent years in the industrial centre of Birmingham would be felt strongly in his later works. Mabel died in 1904, leaving the boys to the care of Father Francis Morgan, a priest at the Birmingham Oratory.  At King Edward's School, Ronald was taught Classics, Anglo-Saxon and Middle-English. He had great linguistic talent, and after studying old Welsh and Finnish, he started to invent his own "Elvish" languages. 1914 saw the outbreak of the First World War. Ronald was in his final year at Exeter College, Oxford: he graduated the following year with a First in English Language and Literature and at once took up his commission as a second lieutenant in the Lancashire Fusiliers. Before embarking for France in June 1916, he married his childhood sweetheart Edith Bratt.Tolkien survived the Battle of the Somme, where two of his three closest friends were killed, but later that year he was struck down by trench fever and sent back to England.  The years after the Great War were devoted to his work as an academic: as Professor of Anglo-Saxon at Oxford, where he was soon to prove himself one of the finest philologists in the world. He had already started to write a great cycle of the myths and legends of Middle-Earth which was to become The Silmarillion. He and Edith had four children and it was for them that Tolkien first told the tale of The Hobbit, published in 1937 by Sir Stanley Unwin. The Hobbit proved to be so successful that Sir Stanley was soon asking for a sequel: but it was not until 1954, when Tolkien was approaching retirement, that the first volume of his great masterpiece, The Lord of the Rings, was published, and its terrific success took him by surprise. After retirement from Oxford, in 1956, Ronald and Edith moved to Bournemouth but when Edith died in 1971, Ronald returned to Oxford.  He died after a brief illness on 2nd September 1973, leaving his great mythological work, The Silmarillion, to be edited for publication by his son, Christopher.