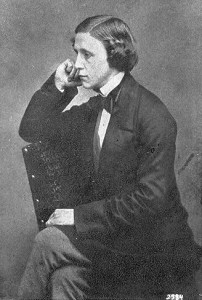 Charles Lutwidge Dodgson, best known by his pseudonym, Lewis Carroll, was born in the village of Daresbury, England, on January 27th, 1832. The eldest boy in a family of 11 children, Carroll was rather adept at entertaining himself and his siblings. His father, a clergyman, raised them in the rectory. As a boy, Carroll excelled in mathematics and won many academic prizes. At the age of 20, he was awarded a scholarship to go to Christ Church College. Apart from serving as a lecturer in mathematics, he was an avid photographer and wrote essays, political pamphlets and poetry. Carroll suffered from a bad stammer, but he found himself vocally fluent when speaking with children. Carroll loved to entertain children, and it was Alice, the daughter of Henry George Liddell, who can be credited with his pinnacle inspiration. Alice Liddell remembers spending many hours with Carroll, sitting on his couch while he told fantastic tales of dream worlds. During an afternoon picnic with Alice and her two sisters, Carroll told the first iteration of what would later become Alice's Adventures in Wonderland. When Alice arrived home, she exclaimed that he must write the story down for her. Also, he was an unbelievably fussy man who wrote no less than forty-eight letters of complaint to the steward at Christ Church while he taught there about everything from odours in rooms to the choice of meat for dinner.  Shortly before his 66th birthday, Lewis Carroll caught a severe case of influenza, which led to pneumonia. He died on January 14th, 1898.

Through the Looking Glass : 1871 (A Travers Le miroir)

Lewis Carroll is best remembered for this story, Alice's Adventures in Wonderland and its sequel, Through the Looking Glass, both of which are children's books with content and style that have often appealed as much to adult readers as to the young. It was published in 1865 and was in fact with a particular child in mind, Alice Liddell. The tale is of a trip (with the additional psychedelic sense certainly intact for the modern reader) beneath normal existence. Alice follows a certain White Rabbit down from the riverside in a dream. This alternate reality follows its own internal logic and is therefore not merely an excuse for fantasy. This logic is played out by now well-known characters such as the Mad Hatter, the Queen of Hearts, the Mock Turtle, the Cheshire Cat and the March Hare whose tea parties and games have taken their place in the folklore of the real world through generations of readers. The story has no moral dimension to speak of and is therefore unusual for nineteenth century children's literature, but it does extol caution and other common sense values in the often foolish choices made by Alice that take her deeper into the strange dimension.