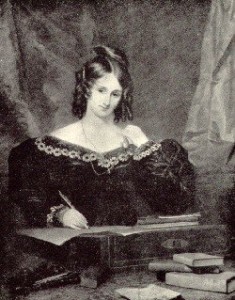 Mary Wollstonecraft Shelley was born in London, on August 30th, 1797. Her parents already held some attention for their radical writing. Her father, William Godwin,was a philosopher, atheist and anarchist. Her mother, Mary Wollstonecraft was the writer of A Vindication of the Rights of Women (1790), and is considered one of the first active feminists. Both parents shaped the revolutionary ideas of the era. Although her parents didn't believe in marriage, they married to legitimize their daughter's birth. Unfortunately, family tragedy plagued Mary for most of her life. Her mother, Mary Wollstonecraft, died 10 days after giving birth to her in 1797, so Mary never knew her mother. She idolized her father, though she disliked her stepmother. From an early age, she was surrounded by famous writers, philosophers and poets. Later, as a young adult, Mary was forced to deal with issues of adultery and suicide in her family. In 1814, she eloped with the married poet, Percy Shelley, and in 1816, after the suicide of his wife, Mary and Percy were married and decided to move to Italy. Of the 4 children that Mary Shelley gave birth to, only Percy Florence survived. Shelley conceived of the story of Frankenstein, her most famous work, during an eventful night out-of-doors near Lake Geneva and through the troubling nightmare that followed. The novel was published in 1818. In Italy, for the first time in her life, Mary’s life seemed relatively stable. Soon, however, this stability was lost when her husband, Percy, drowned. Though many believe that Mary grew up believing in women’s political and social freedom, these opinions seemed to change after the death of her husband, which left her dependent on others. Though she wrote other novels (including The Last Man in 1826, The Sisters of Albano in 1828 and Lodore in 1835), most of her adult life was spent carrying out the traditional female roles of caring for her father and raising young Percy, her one surviving son. Mary Shelley grew old quickly, and died in 1851 at the age of 53 from a brain tumour. She is buried in St Peter's Churchyard in Bournemouth beside the remains of William Godwin and Mary Wollstonecraft.

It is an epistolary novel, told through the letters of Walton, an English explorer in the Arctic. The tale relates the exploits of Victor Frankenstein, an idealistic German student of natural philosophy, who discovers the secret of imparting life to inanimate matter. He manages to reanimate a dead body. The creature, which is big and strong, is terrible in appearance. It inspires loathing in whoever sees it. When the "Frankenstein monster" realizes how he came to be and is rejected by mankind, he seeks revenge on his creator's family to avenge his own sorrow.  Lonely and miserable, it turns upon its creator, and failing to persuade him to provide a female counterpart, finally murders frankenstein's brother, his friend Clerval, and his bride Elizabeth. Frankenstein pursues his creature to the Arctic to destroy it, but dies in the pursuit. Frankenstein is a gothic novel. Gothic novels focus on the mysterious or supernatural; take place in dark, often exotic, settings; and yield unease if not terror in their readers. The double is a frequent feature of the Gothic novel, and in a sense Victor Frankenstein and his monster are doubles. Some literary historians also consider Frankenstein the first science fiction novel.