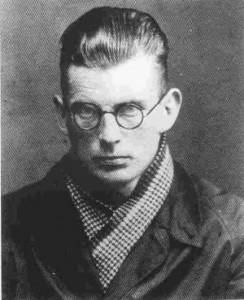 Beckett was born in Foxrock in Dublin. He would later insist that he was born on Good Friday, 13th April 1906, although his birth certificate puts the date a month later. The Becketts were of French Huguenot descent and, after a distinguished career at Trinity College in Dublin, he spent much of his life in France. His cricketing prowess earned him a mention in Wisden (the only Nobel Prize winner there), while he topped his year in modern languages. In 1928, he was appointed to an exchange lectureship in Paris, where he met and helped James Joyce before returning to Trinity College in 1930. He travelled widely, living rather precariously, before settling in Montparnasse in Paris in 1937. His comic novel Murphy was published in 1938. He also met Suzanne Dumesnil, when she helped him to hospital after a street stabbing; they were to marry in 1961. Beckett was in Dublin at the outbreak of World War II, but 'preferred France at war to Ireland at peace'. He worked for the French Resistance, narrowly escaped the Gestapo, then moved to unoccupied France, where he wrote his novel Watt. In 1947, he returned to Paris, where within two years he wrote his trilogy of novels. Molloy, Malone Dies and The Unnameable, and the play Waiting for Godot. By now, he was writing in French, then translating into English. Godot had its first production in 1953, and its success made the reclusive Beckett an international figure. In this innovative tragi-comedy, the tramps Vladimir and Estragon await someone they have never met and who may not exist. 'If I knew who Godot was,' said Beckett, 'I would have said so in the play'. Other bleakly comic plays followed. 'Nothing is funnier than unhappiness, ' says Nell in Endgame, speaking from a dustbin. In Happy Days, the heroine is buried in sand. Beckett was awarded the Nobel Prize for Literature in 1969, but shunned the presentation ceremony. He died in Paris on 22 December 1989. He was one of the major figures of the "Theatre of the absurd"

It portrays two tramps, Estragon and Vladimir, trapped in an endless waiting for the arrival of a mysterious personage named Godot, while disputing the appointed place and hour of his coming. They amuse themselves meanwhile with various bouts of repartee and word play, and are for a while diverted by the arrival of whip-cracking Pozzo, driving the oppressed and burdened Lucky on the end of a rope. Towards the end of each of the two acts, a boy arrives heralding Godot's imminent appearance, but he does not come. There are strong biblical references throughout, but Beckett's powerful and symbolic portrayal of the human condition as one of ignorance, delusion, paralysis, and intermittent flashes of human sympathy, hope, and wit has been subjected to many varying interpretations.

It is a One-act play for four characters. Original in French, entitled Fin de partie and translated into English by Beckett himself. The setting for Endgame is a bare, partially underground room, serving as shelter for the four characters: Hamm the master, Clov his servant, and Hamm's father and mother, Nagg and Nell (who live in garbage cans). Hamm is in a wheelchair and makes Clov move him around the room, fetch objects, and look out the window for signs of life. Outside all seems dead and nothing happens. Inside, the characters pass the time mortifying each other and toying with fears and illusions of a possible change, all along sensing the inevitability of their end. Setting and situation suggests an underground bomb shelter, possibly after the occurrence of a nuclear holocaust.