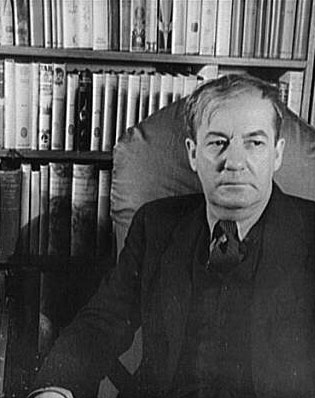 Anderson was born in Camden, Ohio on September 13th 1876. The third of seven children, his father was a veteran of the Union Army. The family was constantly on the move to follow Mr. Anderson's work, painting signs and houses, and Sherwood attended school sporadically, mostly working odd jobs to support the family. Despite a disorderly childhood, Anderson spent his formative years in the town of Clyde, Ohio, observing the small-town life that would form the basis of much of his later writing, including the seminal Winesburg, Ohio. Despite his many travels, Anderson would spend about half of his life in Ohio, experiencing the small-town life featured in his writing.

At seventeen, Anderson moved to Chicago, serving as a warehouse laborer by day and business student by night. He fought in the Spanish-American war for two years, and in 1899 he returned to Ohio for a final year of schooling at Wittenberg College in Springfield. He worked writing advertising copy and, in 1904, moved to Elyria, Ohio to marry Cornelia Lane. While in Elyria he was the president of two companies and earned a successful living in the mail-order paint business. Anderson was living the American dream (he had risen from a warehouse worker to a company president). But his "workaholic" tendencies caused him family troubles. When not at work, Anderson would spend his time writing, straining his relationship with Cornelia. His divided life cost him a psychological breakdown, and on November 28th, 1912, Anderson walked out of his office to begin his writing career. Though the couple separated in 1914, Anderson continued to financially support his former wife and children. On that one day in November, when he left business for literature.

After he left Cornelia, he returned to Chicago to join a writers' group. In the same year, he published his first novel, Windy McPherson's Son, and married Tennessee Mitchell. He also published several short stories in the socialist magazine The Masses; these tales would later be written into his best-known work, Winesburg, Ohio (1919).

Six years later, Anderson travelled to Europe, meeting with several of the decade's "Lost Generation," including Gertrude Stein. Now fully entrenched in the artistic life of the 1920s, he moved to New Orleans to share an apartment with William Faulkner. Around that time he received the first Dial Award for his contribution to American Literature.

In 1928, Anderson, now married to Elizabeth Prall, was living on a Virginia farm and was the editor and owner of two local newspapers. In 1933, under the influence of his new wife, Eleanor Copenhaver, Anderson began to travel widely. During this time he toured factories and wrote about southern labour conditions. He wrote four new texts in the 1930s, his body of work now totaling twenty-seven titles. Sherwood Anderson died of peritonitis while travelling in Panama with Eleanor.

The book begins with a sort of prologue, in which an old writer imagines all the people he has known as "grotesques," warped in their pursuits of various truths. A series of stories ensues, each concerned with a single resident of Winesburg.

The first, entitled "Hands," describes Wing Biddlebaum, a recluse with remarkable hands that he cannot control, who has fled from false accusations of molesting a boy in another town. The second, "Paper Pills," is about Doctor Reefy, an aging medical man who marries one of his young patients, only to have her die six months later. In the third, "Mother," we meet Elizabeth Willard, the mother of the book's central character, George Willard, who is a young reporter for the local paper. Elizabeth is a sick woman, trapped in an unhappy marriage, and she imagines herself locked in a struggle with her husband for influence over George.In the next story, "The Philosopher," the eccentric Doctor Parcival imagines that a lynch mob is after him, and tells George Willard the secret of life: "Everyone in the world is Christ and they are all crucified." In "Nobody Knows," George goes out into the fields and sleeps with a girl named Louise Trunnion, only to feel guilty about it afterward. The next four stories, all lumped under the heading "Godliness," depict Jesse Bentley, a wealthy farmer who imagines himself a Biblical figure chosen by God. His daughter, Louise Bentley, receives no love from him, and stumbles into a loveless marriage. Her son, David Hardy, is sent to live with his grandfather on the old man's farm, and Jesse takes the boy out into the forest in search of a message from God. He finds no message, however, and succeeds only in traumatizing the boy so much that David runs away from Winesburg forever.

In "A Man of Ideas," the next story, a talkative man named Joe Welling successfully courts a woman whose father and brother are notorious thugs. The following story, "Adventure," depicts the loneliness of Alice Hindman, an unmarried woman whose true love (as she considers him) left Winesburg years ago and has never returned. "Respectability" portrays Wash Williams, the filthy, ugly telegraph operator in Winesburg who despises women because of his wife's infidelity and his mother-in-law's treachery. "The Thinker," tells the story of a brooding young man named Seth Richmond who feels that he does not belong in Winesburg. At the end of a long evening with Helen White, the daughter of the Winesburg banker, he tells her that he plans to leave town for good.

"Tandy" tells the story of a little girl named Tandy Hard whose first name comes from a drunken man's description of the perfect woman. In "The Strength of God," a minister named Curtis Hartman is tempted into lust by the sight of Kate Swift, a local schoolteacher. His temptation passes when he sees her, one snowy night, praying naked. "The Teacher" takes place on the same night, and depicts Kate Smith's attraction to George Willard--her simultaneous desires to teach and embrace him--and her sudden guilty flight from his office, which leaves him confused. "Loneliness" details Enoch Robinson's move from Winesburg to New York, where he populates his apartment with imaginary friends, only to have them move out when he tries to tell his female neighbor about them.

In "An Awakening," George Willard goes out walking one night and has what he thinks is an epiphany. He tries to tell Belle Carpenter, the girl he has been seeing, about it, but another one of her suitors beats him up, and the magic of the evening slips away. "Queer" depicts the resentment that Elmer Cowley, the son of a store owner, feels toward Winesburg and George Willard because he thinks that the town considers his family to be odd. The story ends with Elmer beating up George and hopping a train out of town. In "The Untold Lie," a farmhand named Hal Winters asks another farmhand named Ray Pearson for advice about whether to get married, causing Ray to reflect on his marriage, which he does with disgust. "Drink" portrays a genial, happy young man named Tom Foster and his first experience with drunkenness.

In "Death," Elizabeth Willard and Doctor Reefy spend time together and begin to fall in love, as she slips toward death. She dies, finally, and George decides to quit Winesburg forever. In "Sophistication," he and Helen White go out walking together on the night of the county fair, and run around like children as evening falls on Winesburg. Both are moving on from their small town, as Helen is going to college, and in the final story, "Departure," George Willard boards a train and leaves Winesburg for good, letting his life there "become but a background on which to paint the dreams of his manhood."