THE BATTLE OF HASTINGS

Home THE BATTLE OF HASTINGS

An event so significant, it completely changed the course of English history. What makes this event so important to the English is the immutable fact that it was the last time any foreign power was to conquer her. Without doubt, a lesson  that became indelibly etched into this island race - forever. This must surely be the one conflict that every British student and adult alike can recount - hopefully, along with the naming of the two main protagonists. 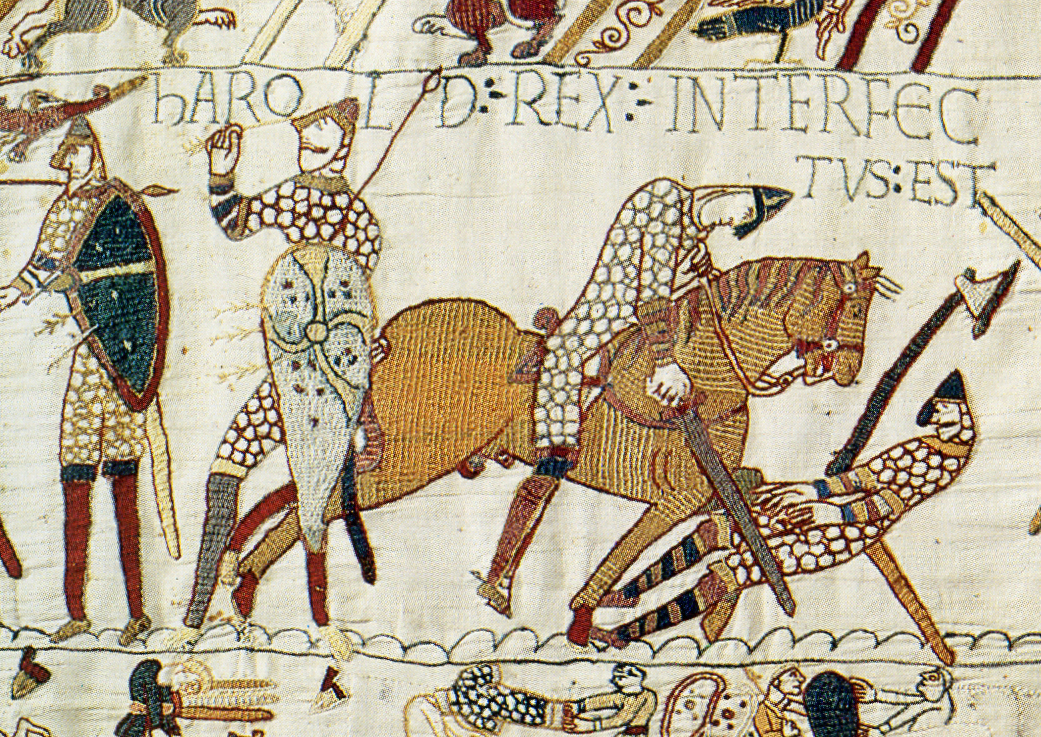 1. The beginning of the trouble :

At the beginning of 1066, Edward the Confessor ruled England. He was 61 years old, and was dying. King Edward had no children, so succession was difficult. There was no direct heir to the English throne. King Edward died on January 5th - in the first week of the new year. As King Edward had no children, it was uncertain who would rule next. Edward died without making it clear who should become the next king. This caused the trouble because many people claimed the throne.

Harold Godwinson claimed the throne.  He said Edward had named him as his succession.  He was a brave and respected leader of men, but he was not a direct heir to the throne. Harold could not become King just from King Edward's dying words; he had to be declared King by the Witan . He managed to get the support of most of the Witan quickly, and was soon crowned King.  Harold was now in charge, but the kingdom was not secure.  He had to get ready to defend himself.

3. The Reaction :
The other claimants were furious.  They each felt they had the rightful claim to the throne. Harold Hardrada,the ruthless Viking, set sail for England.Tostig joined up with him and they landed in Northumbria [see the arrow on the map].Harold Hardrada defeated the local English army in a battle at Fulford Gate.  He now thought he controlled the area.
The new King (Harold Godwinson) was determined to stop him.  He marched north, recruiting men to help him fight.They met at Stamford Bridge on 25th September 1066.  This was to be a vital battle to decide which Harold would rule. 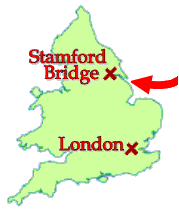 4. The Battle of Stamford Bridge :

King Harold arrived early in the morning on Monday 25th September 1066.  He had rushed to the scene.  The Vikings had not expected him so soon.  King Harold managed to surprise them. However, while King Harold concentrated on the Viking invasion, Duke William had already begun his own invasion on the South Coast. Using his surprise attack King Harold's forces cut the Vikings to pieces.  Harold Hardrada took an arrow full in his chest.  It was a tremendous victory for King Harold.

The Viking invasion force had arrived in 300 ships.  They were so badly defeated that the survivors limped home in just 24! King Harold was ecstatic.  He had defended his kingdom.

While King Harold and his men were still celebrating their fantastic victory,news arrived about Duke William's forces landing in the south.While King Harold had been concentrating on the Vikings, Duke William had set sail and crossed 50 miles from Normandy to the English southcoast.

He landed at Pevensey Bay on September 28th.  Duke William built a fort and camped at Hastings. King Harold had already smashed the Vikings, and now he decided to do the same to the Normans. However, they were at the other end of the country! King Harold and his troops marched 250 miles in 9 days.  An incredible effort! 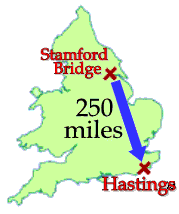 6. Preparing for the battle :
King Harold rushed south, and camped at the top of Senlac Hill about 5 miles from Hastings.The next day (October 14th) the Normans began forming a battle line at the bottom of the hill. The two armies shouted insults and taunts at each other. The two armies were roughly the same size, but there were important differences between them. Senlac Hill was a good defensive position.
King Harold knew the Normans had knights on horseback.  They would find it difficult to fight uphill.  Streams on either side of the hill made it difficult to surround King Harold's forces.Harold and his men were in a better position.  However, Harold didn't have his best forces - many were injured or just exhausted after the Battle of Stamford Bridge. 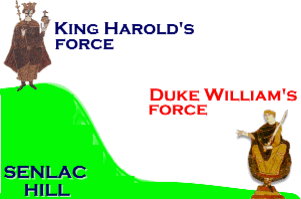 7. The battle commences :
It was 14th October 1066.  There was a slight mist all around.  It was about 9.30 am.  England would never be the same again.
Duke William ordered his archers to fire at the Saxon shield wall.
The Norman cavalry attacked. The shield wall was strong.  The Normans suffered heavy casualties fighting uphill.  There was fierce fighting on both sides.
The noise was incredible!  Again and again the Normans attacked the Saxon shield wall.  Again and again both sides battered each other. Around midday, some of the Normans began to retreat due to the fierce fighting.  Some of the Saxons got excited - they sensed victory- and ran after them down the hill.

Suddenly a rumour went round that Duke William was dead - the Normans were worried!  William shouted to his soldiers and showed his face to prove he was not dead. The small Saxon force who ran down the hill was quickly surrounded by horses. They were slaughtered.

The fighting continued through the afternoon.  The Normans had to find a way to get through the shield wall. Duke William had seen how some of the Saxons had run after the retreating Normans.  He thought this might be the solution.Duke William ordered some of his forces to pretend to retreat.  The Norman cavalry charged at the shield wall, just as they had done all day.  Suddenly the Normans turned and fled down the hill. The Saxons thought the Normans were finished.  The chased them down the hill.  The ambush had worked!

9. The end of the Battle :
The Saxon Housecarls were drawn out of position, and the shield wall was broken.  More and more arrows were fired high into the air by the Normans.Now the main Saxon defence had been broken, the battlefield was in chaos.  There was brutal and vicious fighting from both sides. The Saxons still fought bravely. The Norman attacks were now successful.  The archers were causing casualties, and the Saxons were in trouble.King Harold Godwinson was killed.  The Saxons continued to fight, but without their leader there was little chance. Most Saxons bravely fought on until they died.  Some fled when they saw there was no hope.
The Normans suffered heavy losses at the 'Fosse'.  This is where Saxons fought back strongly, even though they were defeated. The Normans had won the Battle!
Thanks to Mr Field for this comprehensive and very interesting presentation. 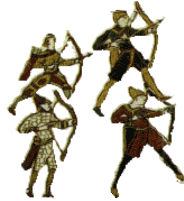