THE ENGLISH PUBS AND INNS

Home THE ENGLISH PUBS AND INNS 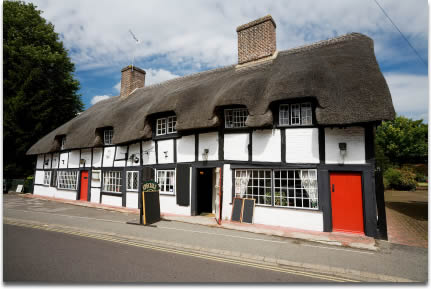 The PUB is more than just a shop where drinks are sold and consumed. For centuries it has been a place where friends meet, colleagues 'talk shop' and business people negotiate deals; a place where people gather to celebrate, play games, or to seek quiet relaxation. England has, over the years, become known for its pub culture.

Pubs (short for Public Houses) are in almost every street and are known for their tradition and heritage. They date back to the time of Roman occupation in England, when the Italians had their taverns in which they would drink alcoholic beverages and socialise.

The first inhabitants of the British Isles were certainly drinking ale centuries before the arrival of the Romans, as archaeological excavations of Bronze Age burial mounds attest. But it is with the Romans, those excellent soldiers, administrators and civil engineers that the origins of the Old English Inn probably lay.

As they constructed their network of roads across the country, taverns sprang up offering wine and food to travellers. The early proprietor identified his establishment by hanging a garland of vine leaves outside on a pole. Some also advertised facilities for playing chess by painting a chequer board on their door post, giving rise to probably the oldest Inn sign of all: "The Chequers"
2. The Saxons
With the departure of the Romans the great roads fell into decay. The Saxons were a great ale-drinking race, but originally lived in small communities. However, as society gradually changed, and the Saxon kingdoms developed, the need for long-distance communications grew once more. Road junctions and river fords again became ideal sites for travellers' rest. In the seventh century, Ina, King of Wessex, established ale houses by law and following the arrival of St. Augustine on his mission to re-establish Christianity, came a stream of Christian missionaries and a programme of monastic building throughout the land. These monasteries were obliged to offer hospitality to travellers and, gradually, separate buildings evolved to provide food, drink and shelter. By 965 AD, King Edgar decreed that the number of alehouses were to be reduced to no more than one for each village! The Norman Conquest of 1066 heralded a further surge in monastic building. Still, the monasteries had a charitable responsibility to feed and shelter the traveller. As the Middle Ages wore on, saints' shrines, such as Thomas a Becket's at Canterbury and Cuthbert's at Durham, became a lucrative source of income.
3. The Entrepreneur
As the abbeys and monasteries established their own Pilgrims Hospices, entrepreneurs set up wayside Inns between the religious houses to cater for the pilgrim trade. Inns were also becoming a feature in the market towns and commercial centres where merchants and traders congregated to do business. At this time the vast majority of the population were illiterate. Hence, we find the extensive use of signs: a pictorial, easily recognisable advertisement to the public. Eventually, Richard II was to command that all Inns should carry such signs.
4. The Dissolution
The Dissolution of the Monasteries in 1534 had consequences for the Inn's prosperity, indeed, in some areas the loss of the pilgrims' trade was catastrophic. But as in the past recovery was soon under way and administrators travelling the King's Highway on royal business required the usual lodging. By this time the typical Inn - as opposed to the private dwelling that might offer rough home-brewed-ale and straw on the floor - would have stabling, a kitchen for the provision of hot meals, comfortable shared bedrooms, and of course a self contained brew house cum tap-room A little later it was the turn of Edward VI to declare there were too many Inns, and once more numbers were heavily reduced by legislation: London had forty, York nine, and small cathedral cities like Canterbury, Bath and Lincoln were allowed three or four establishments each. This bleak period for Innkeepers and brewers was short lived however as the reign of Elizabeth I was to see an interesting new development. 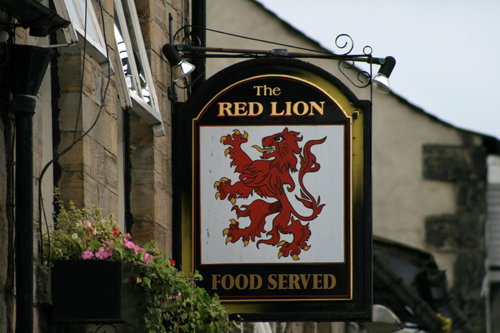 5. The Posting House
Because of the long distances involved for official travel selected innkeepers were paid a salary to provide fresh horses for the use of Royal Couriers whenever required. The Royal Warrant was competitively sought after - it brought not only the salary, but also extra custom. As a consequence of this landlords improved the standards of accommodation and service, in the best time honoured traditions of the market driven economy. It wasn't long before mail and packets were being picked up and dropped at these posting houses on a regular basis. At the turn of the seventeenth century, James I, obliged all Inns and victualling houses to provide lodgings to wayfarers, should it be requested. Tavern keepers, however, were expressly forbidden from doing so, creating all manner of problems for the Justices whose job it was to enforce the regulations.
6. Coaching Days
It was the eighteenth century, which saw the heyday of the Inn. It was during this period that the great coach services expanded and flourished. By the time of the Restoration of Charles II in 1660, London and Durham were linked by a special service and there were connections between Lancaster and Newcastle. The following decades saw routes opening up to London from many major towns such as Bath, York and Plymouth. The Turnpike Act was introduced, levying a toll for the use of a stretch of road, thereby raising money to fund road improvement and maintenance. With better roads came the development of state of the art coaches and the introduction of timetables. With stabling for teams of horses and the necessary facilities for travellers the coaching Inn was of major importance to English life. The stables were usually found in an enclosed cobbled yard with a high arch allowing entrance for the coaches turning off the main road. The Inns themselves were extended, taking over neighbouring houses and adding another story, becoming quite imposing buildings on the High Street of every city and market town. With the coming of the Industrial Revolution first the inland waterways, then the railways criss-crossed the country, requiring new stopover places and new points of arrival and departure. The relatively slow and uncomfortable coaching routes disappeared.
7. The Railways
Town stations encouraged new taverns, grand hotels bulked imposingly beside city termini. Neglected, the coaching Inns fell on hard times. But as so often in the past the wheel turned full circle once more. The era of the motor car ushered in another period of prosperity for the Inn, in town and country or market place.
8. The Twentieth Century and the Twenty First Century
Two world wars, technological advances, cultural fashions, all have wrought changes in its character and integrity. The breakdown of the fabric of community and the introduction of television to entertain individuals in their own homes are but two examples of these changes. So just where does the Inn find itself today? Throughout history, the Old Inn has faced hard times, bankruptcy and, at times, demolition. But never before has our traditional public house faced such a threat as it does today. The "Beer Orders" of 1989, the challenge to "the tie" from the European Commission, the heavy duty imposed on beer which allows cheap imports to flood in from the Continent to damage the livelihood of British landlords, are all serious problems. 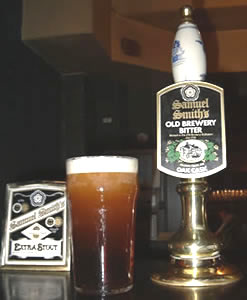 But surely the greatest danger lies in the "theme pub", in the name of which a traditional establishment is thoroughly gutted, to be reborn as a "genuine Irish bar", a "sports cafe" or a "Floozy and Firkin". A number of chains have attempted to recreate the past but it is quite impossible to capture the atmosphere of centuries in the twinkling of an eye. More often than not, genuine history and architecture are replaced by tastelessly orchestrated interior design. Yet, other premises, are sold off for 'change of use' to be renovated and become private homes. In England, smoking has been banned in all indoor areas. Therefore, it is now illegal to smoke inside the pub or at the bar. Beer is the most commonly drunk beverage at pubs. Therefore, they are usually well-stocked with many different brands and types of beer, both bottled and on tap (draught).
In addition to ale, pubs also stock various wines as well as hard tack, such as brandy, whiskey, gin, cane, and so on.
By law, pubs can only open at 11.00 a.m. and can only serve drinks until 11.00 p.m. from Monday to Saturday and until 22h30 on Sunday. Nobody under the age of 18 is allowed to consume alcohol in England and thus they will not be served. In a pub environment, patrons are expected to go to the bar, where they will order and pay for their drinks. They will then wait until they are given their drinks and then carry them back to their table for consumption. There are not waiters that are going to serve customers at their tables. In addition, it is not expected that everyone from one table will go to the bar to order their drink, but that one or two representatives will take care of this chore.
Ye Olde Fighting Cocks holds the Guinness Book of Records title for being the oldest pub in England. It is situated in St Albans, Hertfordshire, and claims to have been established in 1539 of our Common Era (CE). Although there are pubs that claim to be even older, these are yet to be approved officially. It was once known as The Round House, but was probably renamed sometime during the 1800.s. It is situated adjacent to the River Ver.