The discovery of gold nuggets in the Sacramento Valley in early 1848 sparked the Gold Rush, arguably one of the most significant events to shape American history during the first half of the 19th century. As news spread of the discovery, thousands of prospective gold miners traveled by sea or over land to San Francisco and the surrounding area; by the end of 1849, the non-native population of the California territory was some 100,000 (compared with the pre-1848 figure of less than 1,000). A total of $2 billion worth of precious metal was extracted from the area during the Gold Rush, which peaked in 1852. During this period which is supposed to have ended in 1855, over 300,000 people rushed to California to find gold and "strike it rich". 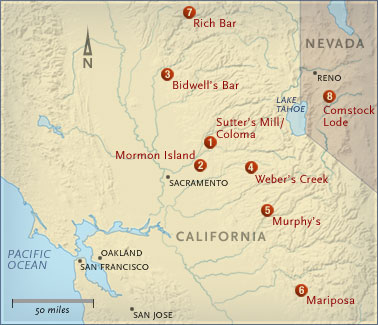 The California Gold Rush began at Sutter's Mill, near Coloma. On January 24th, 1848, James W. Marshall, a foreman working for Sacramento pioneer John Sutter, found shiny metal in the tailrace of a lumber mill that Marshall was building for Sutter on the American River. Marshall brought what he found to John Sutter, and the two privately tested the metal. After the tests showed that it was gold, Sutter expressed dismay: he wanted to keep the news quiet because he feared what would happen to his plans for an agricultural empire if there were a mass search for gold.
However, rumours soon started to spread and were confirmed in March 1848 by a San Francisco newspaper publisher and merchant called Samuel Brannan. The most famous quote of the California Gold Rush was by Brannan; after he had hurriedly set up a store to sell gold prospecting supplies, Brannan walked the streets of San Francisco, holding a vial of gold and shouting "Gold! Gold! Gold from the American River!"
On August 19th, 1848, the New York Herald was the first major newspaper on the East Coast to report the discovery of gold. On December 5th, 1848, President James Polk confirmed the discovery of gold in an address to Congress. Soon, waves of immigrants from around the world, later called the "forty-niners," (The gold-seekers were called the "forty-niners" as a reference to 1849) invaded the Gold Country of California or "Mother Lode". Before the gold rush, there were only around 14,000 non-Native Americans living in California. This soon changed. Around 6,000 people arrived in 1848 and in 1849 around 90,000 people arrived to hunt for gold. These people were called the Forty-niners. They came from all around the world. Some were Americans, but many came from places like China, Mexico, Europe, and Australia.
As Sutter had feared, he was ruined; his workers left in search of gold, and squatters took over his land and stole his crops and cattle.
San Francisco had been a tiny settlement before the rush began. When residents learned about the discovery, it at first became a ghost town of abandoned ships and businesses, but then boomed as merchants and new people arrived. The population of San Francisco exploded from perhaps about 1,000 in 1848 to 25,000 full-time residents by 1850. Miners lived in tents, wood shanties, or deck cabins removed from abandoned ships.

In what has been referred to as the "first world-class gold rush," there was no easy way to get to California; forty-niners faced hardship and often death on the way. At first, most Argonauts, as they were also known, travelled by sea. From the East Coast, a sailing voyage around the tip of South America would take five to eight months, and cover some 18,000 nautical miles (33,000 kilometres).

An alternative was to sail to the Atlantic side of the Isthmus of Panama, take canoes and mules for a week through the jungle, and then on the Pacific side, wait for a ship sailing for San Francisco. There was also a route across Mexico starting at Veracruz. Many gold-seekers took the overland route across the continental United States, particularly along the California Trail. Each of these routes had its own deadly hazards, from shipwreck to typhoid fever and cholera. 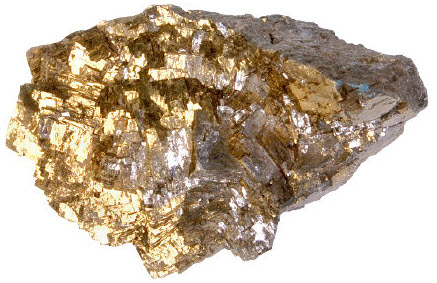 Within a few years, there was an important but lesser-known surge of prospectors into far Northern California, specifically into present-day Siskiyou, Shasta and Trinity Counties. Discovery of gold nuggets at the site of present-day Yreka in 1851 brought thousands of gold-seekers up the Siskiyou Trail and throughout California's northern counties.
Settlements of the Gold Rush era, such as Portuguese Flat on the Sacramento River, sprang into existence and then faded. The Gold Rush town of Weaverville on the Trinity River today retains the oldest continuously used Taoist temple in California, a legacy of Chinese miners who came. While there are not many Gold Rush era ghost towns still in existence, the remains of the once-bustling town of Shasta have been preserved in a California State Historic Park in Northern California.
Gold was also discovered in Southern California but on a much smaller scale. The first discovery of gold, at Rancho San Francisco in the mountains north of present-day Los Angeles, had been in 1842, six years before Marshall's discovery, while California was still part of Mexico. However, these first deposits, and later discoveries in Southern California mountains, attracted little notice and were of limited consequence economically. 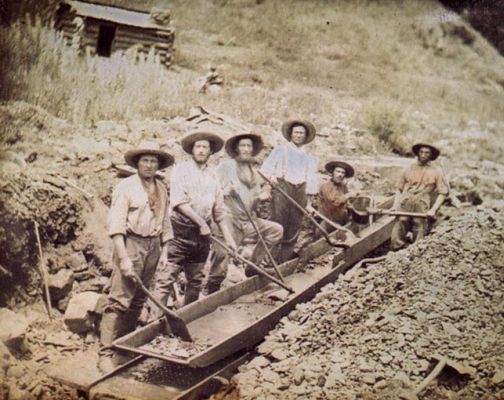 By 1850, most of the easily accessible gold had been collected, and attention turned to extracting gold from more difficult locations. Faced with gold increasingly difficult to retrieve, Americans began to drive out foreigners to get at the most accessible gold that remained. The new California State Legislature passed a foreign miners tax of twenty dollars per month ($570 per month as of 2016), and American prospectors began organized attacks on foreign miners, particularly Latin Americans and Chinese.
In addition, the huge numbers of newcomers were driving Native Americans out of their traditional hunting, fishing and food-gathering areas. To protect their homes and livelihood, some Native Americans responded by attacking the miners. This provoked counter-attacks on native villages. The Native Americans, out-gunned, were often slaughtered. Those who escaped massacres were many times unable to survive without access to their food-gathering areas, and they starved to death.
From Boomtowns  to Ghost Towns. Whenever gold was discovered in a new place, miners would move in and make a mining camp. Sometimes these camps would rapidly grow into towns called boomtowns. The cities of San Francisco and Columbia are two examples of boomtowns during the gold rush. But a lot of boomtowns eventually turned into abandoned ghost towns. When the gold ran out in an area, the miners would leave to find the next gold strike. The businesses would leave too and soon the town would be empty and abandoned. One example of a gold rush ghost town is Bodie in California. Today it is a popular tourist attraction.