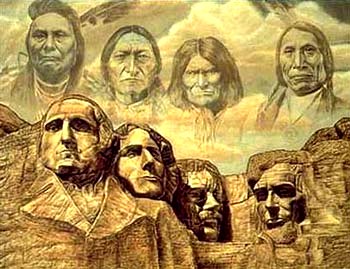 Today, there are about 2.9 million Native Americans, which is probably more than when the first Europeans arrived in the New World. They have succeeded in retaining their identity and occupy a paramount place in the global awareness of the planet.

Many thousands of years before Christopher Columbus’ ships landed in the Bahamas, a different group of people discovered America: the nomadic ancestors of modern Native Americans who hiked over a “land bridge” from Asia to what is now Alaska more than 12,000 years ago. In fact, by the time European adventurers arrived in the 15th century A.D., scholars estimate that more than 50 million people were already living in the Americas.

Of these, some 10 million lived in the area that would become the United States. As time passed, these migrants and their descendants pushed south and east, adapting as they went.

Indians, the name commonly applied to the people found by Columbus in America; are believed to have been the original native inhabitants. Application of the term "Indian" originated with Christopher Columbus, who, in his search for Asia, thought that he had arrived in the East Indies.The politically correct term today is "Native American". These original Americans once inhabited the present United States from Coast to Coast. In manners, customs, and general features the difference between the Indians of the Gulf States and those of the shores of the Northern Lakes is scarcely perceptible; it is only by languages that they can be grouped into great families. East of the Mississippi there were not more than eight radically distinct languages, four of which are still in existence, while the others have disappeared. Many of them are well known such as the Cherokee, Apache, and the Navajo.
Indians generally described America as a sort of Eden where human beings and other creatures lived in symbiosis with nature.
Sometimes smaller tribes were part of a bigger tribe or nation. As best as historians can tell, these tribes were fairly peaceful prior to the arrival of Columbus and the Europeans. The Europeans started colonizing the Americas in order to cultivate new farmlands and create new jobs for the growing populations of Europe. To do so, they often had to fight the Native Americans for the land. Several factors gave the Europeans the advantage in these conflicts. First, they had some immunities to their own diseases. Thus they were not as devastated by them as the Indians were. Second, the Europeans had horses and guns, which overpowered the Indians' hand weapons and arrows in battle. Third, European settlements in the Americas grew at such a rate that the Europeans' descendants eventually outnumbered the Indians. One by one, the Indian nations were defeated.

Indian cultures often reflected the environment in which they were shaped. The social organization of many Indians was based upon family and clan units. The clans were sometimes named after animals knows as totems which were regarded as their spiritual guardians. Therefore, the colonization of North America may be considered as an early ecological disaster. The white settlements mainly resulted in the destruction of cultures, rites, customs and ways of life and the imposition of a new social organization. Indians were even not always recognized as true human beings!

Years after years, they were refused consideration and autonomy. They were exiled in reservations or exterminated. The whites also brought with them terrible plagues Indians could never recover from: greed, violence, epidemics, alcoholism. Western films excelled in featuring Native Americans as noble savages or blood-thirsty obstacles to progress. At the end of the 19th century, there were no more than 250,000 Indians alive. In 1817, the Cherokee became the first Native Americans recognized as U.S. citizens.

The Indians today:
Today, Native Americans account for about 1.5 percent of  the United States population, many of whom continue to take pride in their ancestral traditions -- still practicing the music, art, and ceremonies that took place many years ago. Some of the descendants of the original American Indians live on reservations. There are about 300 reservations scattered in 27 states (mainly West of the Mississippi River). These are areas of land set aside specifically for Native Americans. This helps to protect their heritage and culture. However, only around 30% live on reservations. The rest live outside the reservations just like anyone else. About 70% (2012) of the Indians in the USA live in large cities or rural areas. (up from 45% in 1970 and 8% in 1940). Urban areas with significant Native American populations include Minneapolis, Denver, Albuquerque, Phoenix, Tucson, Chicago, Oklahoma City, Houston, New York City, Los Angeles, and Rapid City.
The rate of unemployment is around 45% (about 8 times the average rate). The Indian life expectancy is under 65 years (48 years in some reservations). One Indian out of four is alcoholic. In the heart of affluent America, many Indians suffer from diseases commonly found in the Third World: the rate of tuberculosis is 9 times higher than the national rate. Indian populations across the continent are once again on the rise. Indian leaders are beginning to achieve greater political success in fighting for the rights of their peoples. In addition, recent widespread concern over human rights has prompted governments and others to respect Indian cultures and traditions when responding to their needs.
In 2009, an "apology to Native Peoples of the United States" was included in the defense appropriations act. It states that the U.S. "apologizes on behalf of the people of the United States to all Native Peoples for the many instances of violence, maltreatment, and neglect inflicted on Native Peoples by citizens of the United States.

Cherokee Prayer Blessing
May the Warm Winds of Heaven
Blow softly upon your house.
May the Great Spirit
Bless all who enter there.
May your Mocassins
Make happy tracks
in many snows,
and may the Rainbow
Always touch your shoulder.