“TO BE OR NOT TO BE” by WILLIAM SHAKESPEARE

Home “TO BE OR NOT TO BE” by WILLIAM SHAKESPEARE 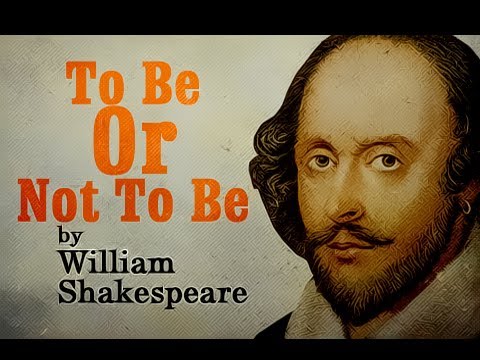 "To be, or not to be..." is the opening phrase of a soliloquy in the "Nunnery Scene" of William Shakespeare's play Hamlet. (circa 1603.)

In the speech, a despondent Prince Hamlet contemplates death and suicide. He bemoans the pains and unfairness of life but acknowledges the alternative might be still worse.

The speech functions within the play to explain Hamlet's hesitation to directly and immediately avenge his father's murder (discovered in Act I) on his uncle, stepfather, and new king Claudius.

Claudius and his minister Polonius are preparing to eavesdrop on Hamlet's interaction with Ophelia.

"To Be Or Not To Be" The Soliloquy

To be, or not to be: that is the question:

Whether 'tis nobler in the mind to suffer

The slings and arrows of outrageous fortune,

Or to take arms against a sea of troubles,

And by opposing end them? To die: to sleep;

No more; and by a sleep to say we end

The heart-ache and the thousand natural shocks

That flesh is heir to, 'tis a consummation

To die, to sleep;

To sleep: perchance to dream: ay, there's the rub;

For in that sleep of death what dreams may come

When we have shuffled off this mortal coil,

Must give us pause: there's the respect

That makes calamity of so long life;

For who would bear the whips and scorns of time,

The pangs of despised love, the law's delay,

The insolence of office and the spurns

That patient merit of the unworthy takes,

With a bare bodkin? who would fardels bear,

To grunt and sweat under a weary life,

But that the dread of something after death,

The undiscover'd country from whose bourn

No traveller returns, puzzles the will

And makes us rather bear those ills we have

Than fly to others that we know not of?

Thus conscience does make cowards of us all;

And thus the native hue of resolution

Is sicklied o'er with the pale cast of thought,

And enterprises of great pith and moment

With this regard their currents turn awry,

And lose the name of action. - Soft you now!

"To Be Or Not To Be" The Soliloquy

The question is: is it better to be alive or dead?

Is it nobler to put up with all the nasty things that luck throws your way, or to fight against all those troubles by simply putting an end to them once and for all?

Dying, sleeping—that's all dying is—a sleep that ends all the heartache and shocks that life on earth gives us—that's an achievement to wish for.

To die, to sleep—to sleep, maybe to dream. Ah, but there's the catch: in death's sleep who knows what kind of dreams might come, after we've put the noise and commotion of life behind us.

That's certainly something to worry about. That's the consideration that makes us stretch out our sufferings so long.

After all, who would put up with all life's humiliations—the abuse from superiors, the insults of arrogant men, the pangs of unrequited love, the inefficiency of the legal system, the rudeness of people in office, and the mistreatment good people have to take from bad—when you could simply take out your knife and call it quits?

Who would choose to grunt and sweat through an exhausting life, unless they were afraid of something dreadful after death, the undiscovered country from which no visitor returns, which we wonder about without getting any answers from and which makes us stick to the evils we know rather than rush off to seek the ones we don't?

Fear of death makes us all cowards, and our natural boldness becomes weak with too much thinking.

Actions that should be carried out at once get misdirected, and stop being actions at all.

And a little explanation:

We don't know what Shakespeare intended the meaning of Hamlet's soliloquy to be since he left us no documents, letters, notes or other private papers to tell us.  So we are left to make our own interpretations of this, as we are with all of his plays.  And of course there are many different interpretations of what Hamlet was thinking and what Shakespeare might have intended - each reader, scholar, actor and director has his or her own ideas.  Just like, I'm sure, you do.

One of the reasons why this soliloquy is so famous is because it speaks to all of us in different ways.  It is something that we can all relate to in our own way based on our own experiences.

On the surface it is Hamlet's thoughts about death and suicide. Basically he is asking why we all suffer all the problems that life gives us, all the heartache and trouble, when it would be easy to end it all by simply killing ourselves.  But he speculates that we are afraid to take that action because of our fear of the unknown, that we don't know but that what waits for us after death might be worse than anything that we face here.  So we don't take action and continue to deal with the world here.

But in a wider sense, Hamlet is saying the same thing about any action - that often we face troubles that we COULD take action on and, possibly, make better, but we don't because we don't know for sure what the result may be.  We may be afraid of failure, or afraid that our actions may just make things worse, or afraid of drawing attention to ourselves, or afraid that others won't approve.  Or maybe we just think about our options so much that we can't decide what to do.  So instead we do nothing at all and just live with the situation even though we have it in our power to change things.

His father is dead, the ghost says he was murdered and tells Hamlet to revenge him.  But, Hamlet thinks, what if the ghost lied.  What if he was not his father's ghost but a demon.  What if he kills Claudius and it wasn't true - he would be committing a sin himself, killing his uncle and his king.  What if he kills Claudius and is killed in the process.  The ghost ordered him not to hurt his mother.  But he hates what she did, so how could he not hurt her.  And if he kills Claudius wouldn't that hurt her?  There are so many questions to answer.  He decides to use the players to try to find out Claudius' guilt, but even then he's torn.  And that's when he starts thinking about what is stopping him from taking the action he wants to take.

So now you can see better why this speech is so famous....

And to finish, here's a good French translation for you: (this may be useful?)