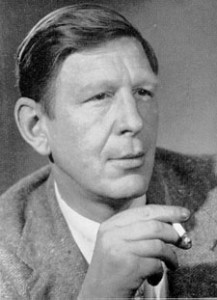 Wystan Hugh Auden was born in York in England on February 21st in 1907. He moved to Birmingham during his childhood and was educated at the prestigious Christ's Church College in Oxford. As a young man he was influenced by the poetry of Thomas Hardy and Robert Frost, as well as William Blake, Emily Dickinson, and Old English verse. At Oxford his precocity as a poet was immediately apparent. In 1928, Auden published his first book of verse, and his collection Poems, published in 1930, established him as the leading voice of a new generation. In 1935, Auden married Erika Mann, the daughter of the German novelist Thomas Mann. It was a marriage of convenience to enable her to gain British citizenship and escape Nazi Germany - Auden was himself homosexual. Ever since, he has been admired for his unsurpassed technical virtuosity and an ability to write poems in nearly every imaginable verse form; the incorporation in his work of popular culture, current events, and vernacular speech; and also for the vast range of his intellect, which drew easily from an extraordinary variety of literatures, art forms, social and political theories, and scientific and technical information. He had a remarkable wit, and often mimicked the writing styles of other poets such as Dickinson, W. B. Yeats, and Henry James. His poetry frequently recounts, literally or metaphorically, a journey or quest, and his travels provided rich material for his verse. He visited Germany, Iceland, and China, served in the Spanish Civil war, and in 1939 moved to the United States, where he met his lover, Chester Kallman, and became an American citizen. His own beliefs changed radically between his youthful career in England, when he was an ardent advocate of socialism and Freudian psychoanalysis, and his later phase in America, when his central preoccupation became Christianity and the theology of modern Protestant theologians. A prolific writer, Auden was also a noted playwright, editor, and essayist. W. H. Auden was a Chancellor of The Academy of American Poets from 1954 to 1973. In 1972, with his health declining, Auden left America. He moved to live in Oxford, in a cottage belonging to his old college, Christ Church. In the late 1950s, Auden had bought a house in Austria, where he spent six months of every year. He died in Austria on 29th  September 1973.

My selection includes of course the very famous ''Funeral blues'' which acquired a large degree of fame because it was read aloud in the movie Four Weddings and a Funeral.

''O tell Me The Truth About Love'' which is a light hearted poem which is a must-read for all. Also ''A Summer Night'' which expresses both fear and hope and ''As I walked out one evening''.