WILLIAM BUTLER YEATS  (1865 - 1939)   was an Irish poet, dramatist and prose writer, one of the greatest English-language poets of the 20th century.

Yeats received the Nobel Prize for Literature in 1923.

He belonged to the Protestant, Anglo-Irish minority that had controlled the economic, political, social, and cultural life of Ireland since at least the end of the 17th century.

Yeats wanted poetry to engage the full complexity of life, but only insofar as the individual poet's imagination had direct access to experience or thought and only insofar as those materials were transformed by the energy of artistic articulation.

He was, from first to last, a poet who tried to transform the local concerns of his own life by embodying them in the resonantly universal language of his poems. 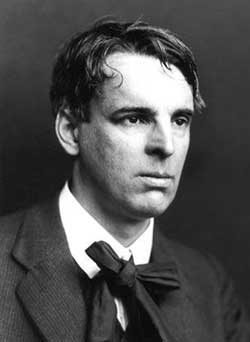 THE WILD SWANS AT COOLE

THE trees are in their autumn beauty,

The woodland paths are dry,

Under the October twilight the water

Upon the brimming water among the stones

The nineteenth autumn has come upon me

Since I first made my count;

I saw, before I had well finished,

Upon their clamorous wings.

I have looked upon those brilliant creatures,

And now my heart is sore.

All's changed since I, hearing at twilight,

The first time on this shore,

The bell-beat of their wings above my head,

Trod with a lighter tread.

They paddle in the cold

Companionable streams or climb the air;

Their hearts have not grown old;

Passion or conquest, wander where they will,

Attend upon them still.

But now they drift on the still water,

Among what rushes will they build,

By what lake's edge or pool

Delight men's eyes when I awake some day

To find they have flown away?

from "The Wind Among the Reeds"

HE WISHES FOR THE CLOTHS OF HEAVEN

Had I the heavens' embroidered cloths,

Enwrought with golden and silver light,

The blue and the dim and the dark cloths

Of night and light and the half-light,

I would spread the cloths under your feet:

But I, being poor, have only my dreams;

I have spread my dreams under your feet;

Tread softly because you tread on my dreams.

THE ROSE IN THE DEEPS OF HIS HEART

All things uncomely and broken,

all things worn-out and old,

The cry of a child by the roadway,

the creak of a lumbering cart,

The heavy steps of the ploughman,

Are wronging your image that blossoms

The wrong of unshapely things

is a wrong too great to be told;

I hunger to build them anew

and sit on a green knoll apart,

With the earth and the sky and the water,

For my dreams of your image that blossoms