William Wordsworth (1770-1850) was a British poet, credited with ushering in the English Romantic Movement with the publication of Lyrical Ballads(1798) in collaboration with Samuel Taylor Coleridge.

Wordsworth was a defining member of the English Romantic Movement.

Like other Romantics, Wordsworth’s personality and poetry were deeply influenced by his love of nature, especially by the sights and scenes of the Lake Country, in which he spent most of his mature life.

A profoundly earnest and sincere thinker, he displayed a high seriousness tempered with tenderness and a love of simplicity. 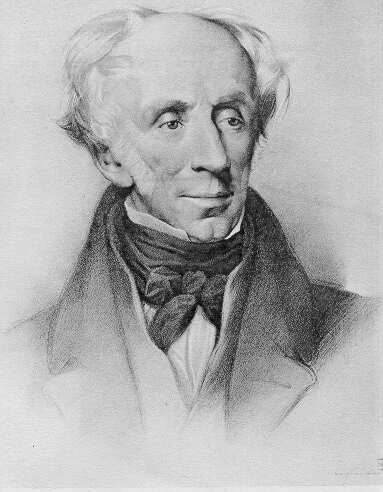 I wandered lonely as a cloud

That floats on high o'er vales and hills,

When all at once I saw a crowd,

A host, of golden daffodils;

Beside the lake, beneath the trees,

Fluttering and dancing in the breeze.

Continuous as the stars that shine

And twinkle on the milky way,

They stretched in never-ending line

Along the margin of a bay:

Ten thousand saw I at a glance,

Tossing their heads in sprightly dance.

The waves beside them danced; but they

Out-did the sparkling waves in glee:

A poet could not but be gay,

In such a jocund company:

I gazed - and gazed - but little thought

What wealth the show to me had brought:

For oft, when on my couch I lie

In vacant or in pensive mood,

They flash upon that inward eye

Which is the bliss of solitude;

And then my heart with pleasure fills,

And dances with the daffodils.

How clear, how keen, how marvellously bright

Which, strewn with snow smooth as the sky can shed,

Uprisen, as if to check approaching Night,

And all her twinkling stars. Who now would tread,

Terrestrial, but a surface, by the flight

Unswept, unstained? Nor shall the aerial Powers

Dissolve that beauty, destined to endure,

Through all vicissitudes, till genial Spring

Has filled the laughing vales with welcome flowers.

I marvel how Nature could ever find space

For so many strange contrasts in one human face:

There's thought and no thought, and there's paleness and bloom

And bustle and sluggishness, pleasure and gloom.

There's weakness, and strength both redundant and vain;

Such strength as, if ever affliction and pain

Could pierce through a temper that's soft to disease,

Would be rational peace--a philosopher's ease.

There's indifference, alike when he fails or succeeds,

And attention full ten times as much as there needs;

Pride where there's no envy, there's so much of joy;

And mildness, and spirit both forward and coy.

Of shame scarcely seeming to know that she's there,

There's virtue, the title it surely may claim,

Yet wants heaven knows what to be worthy the name.

This picture from nature may seem to depart,

Yet the Man would at once run away with your heart;

And I for five centuries right gladly would be

Such an odd such a kind happy creature as he.